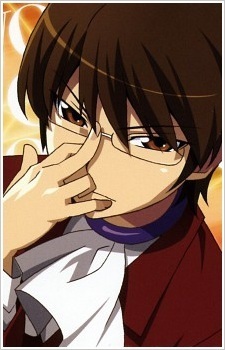 Valefor Aug 8, 2018 11:56 PM
Can't say I have anything. For the kind of experimenting concepts Zaregoto did explore, it is probably a very unique piece of mystery/parody literature, both in the japanese canon than outside. If you are interested in the way it explores novel ideas about mysteries and subvert tropes, as well as how messed up it is in certain parts, then there is nothing. If instead you just liked the quirky characters and the constantly reiterated dialogues style just pick anything from Nisio, his later works will never be as good but the characters traits are pretty much there.

Valefor Aug 7, 2018 7:04 AM
I did know Kizu was part of a bigger series when I read and reviewed Kizu, I think I watched most of the anime adaptation by then, so rather than complaining about the lack of an overall character development my point was that in kizu there was a lack of significance, making the book pointless. Having watched all the adaptations didn't exactly change my mind, right now I find myself thinking that most of anything monogatari did after bake was either rehashed, immensely disappointing or just bad, the same goes of course for the characters. I can see how the series may still be appealing to many, but after nine years of more of the same I just don't really like its formula anymore.

Salu4 Jan 19, 2018 4:51 PM
Hi dude,I am here about your review on Yakushoku Distopiary.At the end of your review you said that the author was continuing his work at http://endelta.jp/gesellschaft/ but i found out that the site is Japanese so i was wondering if there is anywhere that i can follow the series in English,much appreciated.

InkSpider Oct 17, 2017 3:46 PM
Glad to hear you got something out of my review! I had a Fist of the North Star fan who declared a personal vendetta against me because of my review of that show a while back, and I'm always glad to meet level-headed people on this site.

I'm a little bit swamped on my watch-list right now, but I will try to take a look at Monogatari. If you want to see me review a show that doesn't screw up fanservice, there's my review of Sakura Trick. Personally, I have no problem with fan-service when it is used to demonstrate that deliberate sexuality is an important part of the character (Faye Valentine in Bebop, or Kurumu in Rosario + Vampire, for example) or when it's justified by character relationships (as in Sakura Trick). Even pointless fanservice usually doesn't bug me too much if it isn't degrading and non-consensual. Which in Geass, it almost always is.

NyxShinigami Sep 29, 2017 4:59 AM
Hey thx for welcoming me here, and I see you are a fan of Keima Katsuragi that anime and manga series is what got me into anime!, too bad it didn't get much attention and never got a season four.