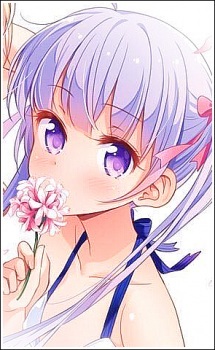 lolshhdh6 Sep 16, 2020 6:49 AM
i already watched demon slayer and its great,rn im finally watching steins gate and i still don't get it why people like it so much

but Naruto series is rewatching material for me

MorningStorm64 Aug 15, 2020 12:46 AM
The star in question that I'm going for now is about 35 minutes long and all of that is just really hard shit, it's just really unrelenting in every single way. There's a frame perfect wallkick about halfway through but that's it for the frame perfect stuff, but there are just so many other ways to create difficulty in SM64 hacks and required frame perfect inputs are generally frowned upon in the community. My current hardest star is 21 minutes long and from the same level as the star I'm going for now. It took me like 50-60 hours to get the star and I choked at the very, very end 3 times, and choked at least another dozen times that were quite far into the attempt as well. Once I get the star I'm going for now, I'm never forcing myself to do anything harder than this because this game can actually impact your mental health at this difficulty level, at least it can for me. I still have some other really hard stuff I wanna do, but nothing actually harder than this.

It can take a few months to over a year to create a full SM64 hack. There's no rules saying a creator has to beat their hack for it to be released. I beat both my hacks savestateless 100% but most extreme hack creators only beat their games with savestates. So a creator beating their game savestateless is more of an exception than a rule in the case of (at least the very difficult) SM64 hacks. But releasing a hack that hasn't even been tested WITH savestates would be heavily frowned upon in almost all cases.

My mom didn't have any bill for covid because it didn't affect her all that badly. She just rested for like 5 days and was mostly back to normal aside from some very minor stuff that lingered for another week or so. Was home the entire time, never needed hospitalization or was even close to it.

lolshhdh6 Jul 8, 2020 8:01 AM
yeah FMAB was great
now im watching one of the big animes Bleach
MC's transformation are the only good thing about this show and everything seems boring af

do you know any anime i might find interesting?

MorningStorm64 Jul 8, 2020 2:56 AM
Yeah, that's fine, I'm not on here as often as I used to be either but I still check in at least every week or so. Currently I'm working on trying to beat what would be the hardest SM64 level ever beaten by a human if I pull it off but someone better than me is also gonna be going for it soon so I have like a 5% chance of being the first one. And this person is 100% confident they can do it too and get a few even harder things while I have severe doubt I'll actually ever pull it off at all. (Their 6th hardest star is the same as my hardest one currently, they have every single one of the top 6 hardest stars ever gotten and are the sole completionist of 3 of those stars) Don't get me wrong, I'm friends with them and a lot of other extreme hack players in the community and stuff but there are a few people whose skills I am extremely jealous of. Most other people are not competitive about this stuff like I am.

I also just released my 2nd hack a few days ago and most people who've played it seem to really like it so far, so that's nice. There's supposed to be some people streaming my hack on Twitch and racing to complete it blind like they did with my first hack and I'm excited because that was one of the most fun things I ever watched when they did it with my first hack.

Recently I finally decided to do a few other things with my free time not involving SM64 hacks. Walked on my treadmill, watched some anime eps here and there. Got quarantined at home for a bit because my mom tested positive for Covid but she's all better now and our quarantine is officially over today. Biggest reason I hope this stupid pandemic ends as fast as possible (besides the actual harm it causes people) is because I really wanna experience another anime con someday.

miymoons Jun 15, 2020 8:42 AM
personally im only watching 4 seasonals, which i dont really do, there really is alot of good anime this season.

but i myself am taking a break from mal, so sorry for the late response.
i wish you well, im not entirely leaving the site, but i do really want a break.
ttyl

MorningStorm64 Jun 9, 2020 9:38 PM
Well, it's just my personal 1st and 3rd hardest stars, not the hardest ones of all time, though they're both top 10. Right now though, I started practicing to get a star that would be the indisputable hardest one ever gotten if it were gotten today. I am ready to put 100+ hours into this if it comes to that and it feels like it will because I'm at about 8-9 hours of practice already and it feels like I've barely made a dent in terms of getting consistent at anything.

I finally watched a bunch of anime one day the other week while hanging out with friends, so that was nice. My mood has been pretty good ever since then for the most part. Not great, but better than it's been for the past few months.

I'm envious if it takes you 2 weeks to get tired of new games, for me it can be as little as 2 hours sometimes. Like new games have to really be something special or super entertaining to hook me AT ALL. Most are met with complete apathy from me.

i finished dororo and jojo's five seasons in start of quarantine
at the moment im watching Fullmetal Alchemist: Brotherhood

I also hope you’re doing great too, especially during these rough times

MorningStorm64 May 12, 2020 9:58 PM
Let's just say that right now even talking about my job is mentally draining for me and leave it at that.

No, most people who make extreme SM64 hacks only test to see if they're possible with savestates. The creator being the first to savestatelessly 100% their own hack is pretty unprecedented actually, at least in the case of a full-length extremely difficult hack. On the hardest stars list, there isn't a single star where the creator was the first to clear it and prior to me getting this star I'm not even sure there was a star on there where the creator beat it at all without savestates. Also yesterday I got my new hardest star of all time, this one's in the top 3 hardest stars ever beaten without savestates and I'm the 4th person to complete it. So I got my currently 1st and 3rd hardest stars in the span of about 2 weeks. And the star that was my #1 hardest 6 months ago is now just my 7th hardest.

Glad Symphogear reminded you of me. Did you ever get around to watching any of it yet? I'm gonna try and start getting back into anime here myself soon. I really need to find a few shows to get me hooked.

Boring job, huh? I wish my job was just boring instead of making me want to scream constantly from stress/anxiety lol. I'm trying to change my job to something less stressful though, like stocking shelves maybe. I'm glad I'm not in school or college anymore because I bet the online classes are a pain in the ass.

Glad you have a new game you can get really into. I bought like $100 worth of new games (some several years old) like a year ago hoping I'd get really into at least one of them. Tried a few of them and they've collected dust since, some unopened. Just can't get into new games anymore. It's just SM64 hacks. I'm working on my 2nd hack now and looking forward to some new extreme hack releases. Also feels like there's a bit of a divide between the casual and extreme hack players/creators in the community and what they consider a good/fun hack.

and ooooh! you have twitter ^.^hehe I'm kinda new to it , haven't figured out much

Been a while right? one would think now that we spend most our time locked up in our houses will be less busy but that's totally not true ain't it!?

will with the whole quarantine thing I've realized a few things one of 'em is that I like my less than I thought since I'm forced to be around them 24/7 now!

im safe from the pandemic
i hope you are safe too

MorningStorm64 May 6, 2020 9:04 PM
Hey, I was wondering when I'd hear from you again! This pandemic fucking SUCKS when you work at the grocery store. My job is just much more overwhelming and stressful than before and I hate it so much. But I don't really even feel like talking about that. My life is still consumed by SM64 hacks lol. I released my first hack about a month ago and I also became the first person to beat it after the release. The hardest star in my hack is now also the 2nd hardest one I've ever gotten: https://www.youtube.com/watch?v=dBiGeGRSHM8 This took 17 hours of attempts for me lol and I had a death 95% of the way through the star using a slightly different route at one point. When I released the hack, a bunch of people streamed it and there were even four people doing a blind race of the game! So that was fun to watch, they all got pretty frustrated XD. There are a lot of shitpost hacks out there, but mine has a full 182 stars and I actually tried to make it fun and challenging. It's actually causing drama in the SM64 hack community a bit because people are debating whether it deserves to be on the list of important extreme hacks. It basically meets all the criteria except for the fact that it's a shitpost and the others take themselves more seriously.

I actually haven't watched anime since around the last time you messaged me because SM64 hacks. I really need to get back into anime again, I need to find a really good one, I miss being into anime a lot. I wish I had something to talk about besides SM64 hacks, but all I do is work, eat, sleep, and SM64 hacks now because of quarantine. Before I would at least have friends over once every two or three weeks. I have a 100% playthrough I did of my own hack on my YT channel, so if you wanna see some of the levels I designed besides the hardest one there's that. If not, it's fine. The one in the video above is waaay more difficult than the rest of the game, though there are still some other hard levels.

Anyway, do you have any conversation-starters on other topics? Anything interesting happening on your end lately?