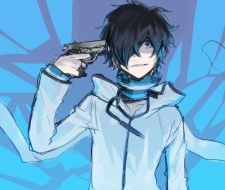 Yasu-kun May 7, 2013 9:15 PM
Sorry for my late reply again. Like I said, it's not uncommon (although once the school year ends, it should be less of a problem). I didn't forget, though.

Well I can tell you really like that series, haha.

What do you think of the spring 2013 series at this point?

Yeah, I imagine it must take a good amount of time to make them.

Haha, yeah, it's still going. I started watching and was uninterested really early on. Plus, I wasn't sure if I could catch up..

Haha, I thought it wouldn't be that hard to keep updated on One Piece once you're caught up. Are you the kind of person that likes usually likes to wait for a series to end, then watch it all?

Ah, I see. Yeah, with some old or really lengthy series, I can't find the torrents to the episodes. I'd probably have to stream One Piece if I decided I wanted to watch it. About Detective Conan, when did you start watching it? Do you mind the art style?

2xhii Apr 7, 2013 10:53 PM
Wallowallowallo. Anywho. The Persona series. Should I be familiar with the franchise to watch the anime? ._. I plan on watching it very soon, maybe after I finish Sakurasou.

Ah, I see. It's cool that you and some others change their profile by themes. I haven't seen the first episode of Devil Survivor 2, but I've been a little behind in anime recently (especially having watched a lot of TTGL yesterday, saving all of my work for today). However, I'll let you know what I think when I see it.
I watched all of the winter season (besides second seasons of series I haven't seen, and also GJ-bu, which I managed to never see until the end), and I really liked doing that, so I now watch all of the season's series, plus one or two already-completed titles.

Yeah, I initially extremely disliked Aku no Hana, almost like a memory of anime I would never forget, and a bad one. But I'm going to see how it goes as it progresses, because it might grow on me a little. Yeah, I noticed that as well, the characters should be realistic, but some should look a little noticeably better than others.
Yeah, that's a policy a lot of people (including me) try to go by, not dropping a series. Only 1 of my dropped series was a normal season's length. The rest were because they were such long series and therefore may have been slow-paced. gj on not having any, though. I would like to watch One Piece, but I don't think I can get myself to catch up.

Thank you, I also like it a lot. Of course I'd like it a lot, but I just redid it about a month or two ago, and completely changed everything. I really like editing it with pictures or little things I can add, so I edit it at least every week (even if it's only something minor). I just added a tab for marathoned series, and will soon add one for anime quotes that stood out or I really liked, once I find the time for it.

Oh, so did you ultimately like the adaptation they did?
I didn't like it (like a lot of others), but it's growing on me ever so slightly. I liked the art and how realistic it was, although the animation itself seemed a little off. I saw that it's very different (in terms of character design) from the manga, the anime looks much more realistic.
I hope so, the first episode was a little slow. I really didn't like the soundtracks, but I'll pay more attention next time and see. The ending was just as creepy as the episode, haha, but it kind of fits, I must admit.

Yasu-kun Apr 6, 2013 2:07 AM
Nice profile page, great images. I also like the muffins, biggest and best muffins for the best series!
What did you think of Aku no Hana?

ShintakoInari Jan 4, 2013 3:27 PM
I don't really have that much I need to show, so all you'll probably need is. . .
- a little description of what our constantly off topic club is suppose to be on topic about

. . . and i really dont know what else. Am i missing something? D8
All Comments