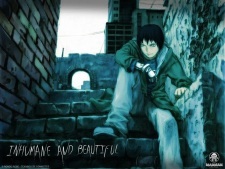 Seriously though, I was hoping you'd still be active, our club would love to have your opinions on board XD

Takamichii_S Jul 17, 2017 9:55 AM
you Dropped every Good anime ? maybe you should stop watch anime and just watch Spongebob Squarepants. please dont be salty, i know you're younger than me, but i hate salty kid like you so much

Kazami Jul 8, 2017 8:14 AM
Hi, stranger. I'm a bit interested in your taste and would definitely love to see your character favorites section filled.

I guess. But maybe it will be stupid fun like Masou Gakuen HxH.

Of Alice to Zouroku I have only seen the first episode so far. I like Ani ni Tsukeru, Re:Creators and Virgin Soul. I don't like Tsuki ga Kirei and I haven't even bothered with Eromanga-sensei.

The other ones, that I like are ID-0, Seikaisuru Kado, Sakura Quest, Renai Boukun and Tsugumomo. I'm not sure about Akashic Records and Sin: Nanatsu no Taizai yet.

But the others weren't exactly shy with their words too.

I read the SukaSuka episode 2 discussion and how the people call you salty or say "you're thinking with your dick", is quite ridiculous.

And that they accuse you of "shoving your opinion down the throat of others", while they apparently can't accept, that you have a different opinion is pathetic and nonsensical.

While I not agree with everything you said, I respect your opinion.

plutodiplomat Apr 18, 2017 6:36 PM
Hey, thanks for the corrections on my post about sin: nanatsu no taizai. I was looking at your anime list and was wondering why you rated baka and test so high? To me, the whole avatar system seemed kind of pointless, like the fact that F class could beat F class by running rather than engaging in the intended means of battle demonstrated the fundamental problems with the series. I didn't really enjoy any of the episodes with the avatars, and the remainder was some ok but not great high school comedy. The second season was even worse, I either wasn't paying attention or some of the less frequent characters hadn't made much of an impression on me so I was always like "Who's that? What's going on?" I somehow made it through both seasons and rated them at 5 and/or 6, and since the way I think about ratings is similar to you, I didn't like them very much.
All Comments