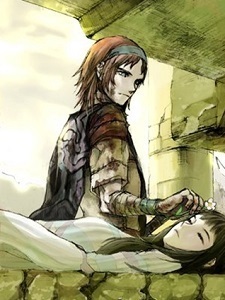 danksonic Jul 3, 8:14 AM
It really is a great pleasure to wish the person who made that amazing Citrus review a happy birthday!

frostybaby13 Mar 2, 5:00 AM
Great Citrus review, I read just a paragraph or two before I watched the show - I hadn't been keeping up with my yuri anime for about 5 years or so, so a lot of the newer titles like this slipped under my radar. I wish I could watch anime in a vacuum like I did when I first started, because once I was aware that this show was controversial - I went in watching it defensively, because I'm a big lover of shoujo-ai/yuri. I thought it was delightful, and loved getting to finally see girls kissing - in my favorite anime, Revolutionary Girl Utena, we don't get to see that (not in official art). And Yuzu reminded me of another favorite character of mine, Hachi from NANA. :D Anyway, I enjoyed returning to your review and reading it as a way to appreciate what I'd seen a little more than just going by my feelings - but my feelings did say, I ENJOYED, and so thanks for the rec! :D

RebelPanda Feb 28, 1:34 PM
Can we talk on voice chat? I have homework to do and there's nothing I hate more than responding to people's condescending and longwinded essays in my comments. The 1 reason I didn't delete your comment is that I respected you.

Lloydy33 Jan 29, 5:15 PM
I agree. It seems quite a regressive way to think to be honest. They hear a couple of negative things about said media and they tend to steer away from it without actually checking for themselves whether or not that media is deserving of this stigma. It's wrong, but, I think "The squeaky wheel gets the oil" applies in this instance. Bandwagoners, essentially. It's worrying how damaging undeserved stigma can be to some truly great anime.

I don't know what anime that person was watching, but I did not see any of what he was claiming in my viewing of Citrus. It's a shame really that he sees it that way because I found some moments in that anime quite endearing.
I thought your review of Citrus was great and although opinions are subjective, I thought most importantly your review was fair.
However, people like that person play a large part in why I tend not to rely on reviews too much and just watch the anime and decide for myself. That's not to discredit your review at all, it was a nice change to see a positive review of an anime I liked!

Lloydy33 Jan 22, 10:22 PM
Hey, I just saw your exchange with RebelPanda regarding Citrus. I've already got my own issue with him, but when I was checking out his profile, I saw this exchange regarding Citrus between you and him. He prattles on boldly claiming that your opinion is in the minority, but a simple bit of observation says otherwise. If anything, his opinion is in the minority.

While it seemed like a civil and polite debate for the most part, in the last comment he's very subtly mugging you off! Especially with the last few lines, where he essentially is calling you a pervert and that you lack dignity for giving a positive review to Citrus, or for even reviewing it at all, really.

So is he basically shunning Citrus because he claims it's misogynistic and contains "fetishization of sexual assault" ?

RebelPanda Jan 20, 1:24 PM
We must occupy different spaces on the internet, and spend our time around different people, because I do not see mass amounts of people defending the sexual assault in Citrus. In fact, I've only seen it in your comments and a few MAL reviews. I find it "conjectural and archaic" to critically analyze an anime that actively harms a portion of the population who still faces discrimination nowadays. I don't know if you've actually asked real life lesbian what they think about Citrus, but going by my friend's response, and others on the internet, they seem to find it offensive and that it sets a negative example for their identity.

It seems like you deliberately took my words out of context, in doing so weakening my argument, so I'll lay it out one more time. Combined leering camera angles, nudity, non-consensual and lascivious conduct make Citrus a repugnant anime for me and many others. Do what you want with that information, but I will respectfully disagree with you. I don't wish to continue this conversation because I believe Citrus is an anime that isn't worth critical analysis, and one who does is quickly labeled a pervert by society. I'm not afraid of people disagreeing with my opinions. I simply have dignity and a reputation to uphold.

RebelPanda Jan 19, 6:24 PM
It seems like I, and nearly everyone else who watched Citrus interprets fanservice and fetishization differently than you do. No matter how deeply you analyze these scenes, you will always have to remove them from context to convince me they're not fetishized. Your words do not remove the combined leering camera angles, nudity, non-consensual and lascivious conduct. As for your comment about trigger warnings—no one would dispute that. The same goes for "Nothing is pleasing...about this scene," because no decent person would dispute it is uncomfortable to watch. Your tendency to put universally agreed-upon claims right beside analysis that, to me, seems detached from reality, comes off as disingenuous revealing some underlying bias. I gave the show a fair chance, I did like it originally, and as I've matured my moral system has changed.

I would like to say I am not asking for your forgiveness for having an opinion which conflicts with your own. I respectfully disagree with many of my friends. Your tone seems to indicate you're on the defensive, and I do not want to attack you, so I wish to end this conversation as soon as we can. If you took my phrasing personally or as offensive, I apologize, it was not intended.

RebelPanda Jan 18, 2:04 PM
I rewatched Citrus with some friends before I unsubbed from Crunchyroll. I felt embarrassed I ever defended it. We agreed there's depth to the characters, and I still like Yuzu, but that doesn't negate the fetishization of sexual assault. After being in a relationship like the one depicted in Citrus, I know now it's something that stories must be handled tactfully, not tastelessly. It is everything bad about the yaoi/yuri genres. If I defended Citrus it would be hypocritical because I criticize other series for having the same problems.

RebelPanda Jan 14, 12:53 PM
Don't go into Deca Dence expecting Youjo Senki. The writing is infinitely better, and more importantly on the other side of the political spectrum.

I'm glad you are taking care of yourself. Np. Let me know if I can do anything to help, I'm always on discord if you wanna chat :)

RebelPanda Jan 7, 5:08 PM
Hey, I've been good! The best anime I've seen recently are Akudama Drive, Deca Dence, and Jujutsu Kaisen. There are a bunch of promising premieres too.

Sorry to hear about your mental health, taking a break from the internet is typically beneficial at times like that. Do you have a support network to fall back on? I hope you do get back into reviewing. However, the game is more competitive than ever.

dotta Dec 31, 2020 2:44 AM
i quite like your Citrus review (im in the middle of re-watching the show now, and it's far better than i remember), except when you try to make a case for objective opinions. Your justification of what many assumed controversial was already strongly presented, you didn't need to resort to that. While I agree with the sentiment "not all opinions are created equal" i don't believe there are right and wrong takes. even an extremely uniformed and shallow take will never have an arbiter to say wrong or right. thats why discussing/reviewing these types of things has any purpose at all.