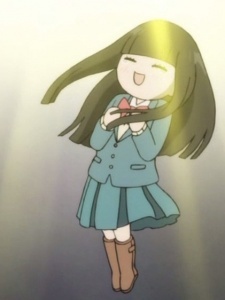 Ousto Jan 12, 2013 12:30 PM
IKR overall this season doesn't look that great, I'm only really excited for some sequels and Chihayafuru !!

I WONT FORGET ABOUT U GURL

(Also, if you get on Skype and you see that I'm not online, try sending me an anon ask on my tumblr! I might be on but just not on Skype!)

Vensito Feb 24, 2012 8:46 AM
Yeah, just wait til Summer comes around though :O! You'll be doing like 30 episodes without breaking a sweat! Yeah I used to skip school to finish some animes sometimes(not very smart), totally worth it lol.

Vensito Feb 22, 2012 6:52 PM
Haha, I used to have a lot of time to just sit around and do nothing but watch anime all day, sometimes I'd marathon about 60 episodes in a day so it wasn't too out of the ordinary to finish a couple series per day for me xD. Now I've kinda slowed down though(which is why I have such a large backlog of anime I still have yet to catch up to/finish.

That's a great goal! Then you should move onto finishing EVERY ANIME IN THE WORLD!

Vensito Feb 13, 2012 2:33 PM
Yeah lol, Another is another anime that I need to catch up with(heh). But like most of them, I think I'll end up waiting til it finishes to complete it.

Vensito Jan 18, 2012 12:57 PM
Anything honestly xD. I kinda got behind at the starting line of the shows but I've been steadily trying to keep pace with the rest of the ones I've yet to start. You enjoying any of them so far?

Haha, I do that sometimes since I have anime on my TV, computer and now that I have a Nook, I can be on Netflix watching anime on that as well so 3 animes at the same time xO!

Vensito Dec 21, 2011 6:17 PM
Actually, I'm the same with that Dx I've been meaning to catch up to Fairy Tail for so long now but every time I do, I just leave it alone for even longer and now I'm like 70 episodes behind or something...ugh.

Vensito Dec 20, 2011 7:49 PM
Good idea, I always try to stick to the shorter series as well xD. But eventually you're gonna have all those long series left to watch then D:.

Ah man, no time to have complete anime adventures :(.

Well I hope by now you are out and having fun with your anime escapades! Got anything specific you want to start off with finishing?