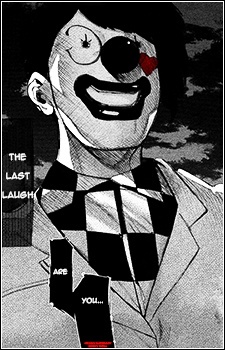 ¨not those stupid clowns we have nowadays irl


have u read latest chapter tokyo ghoul re? 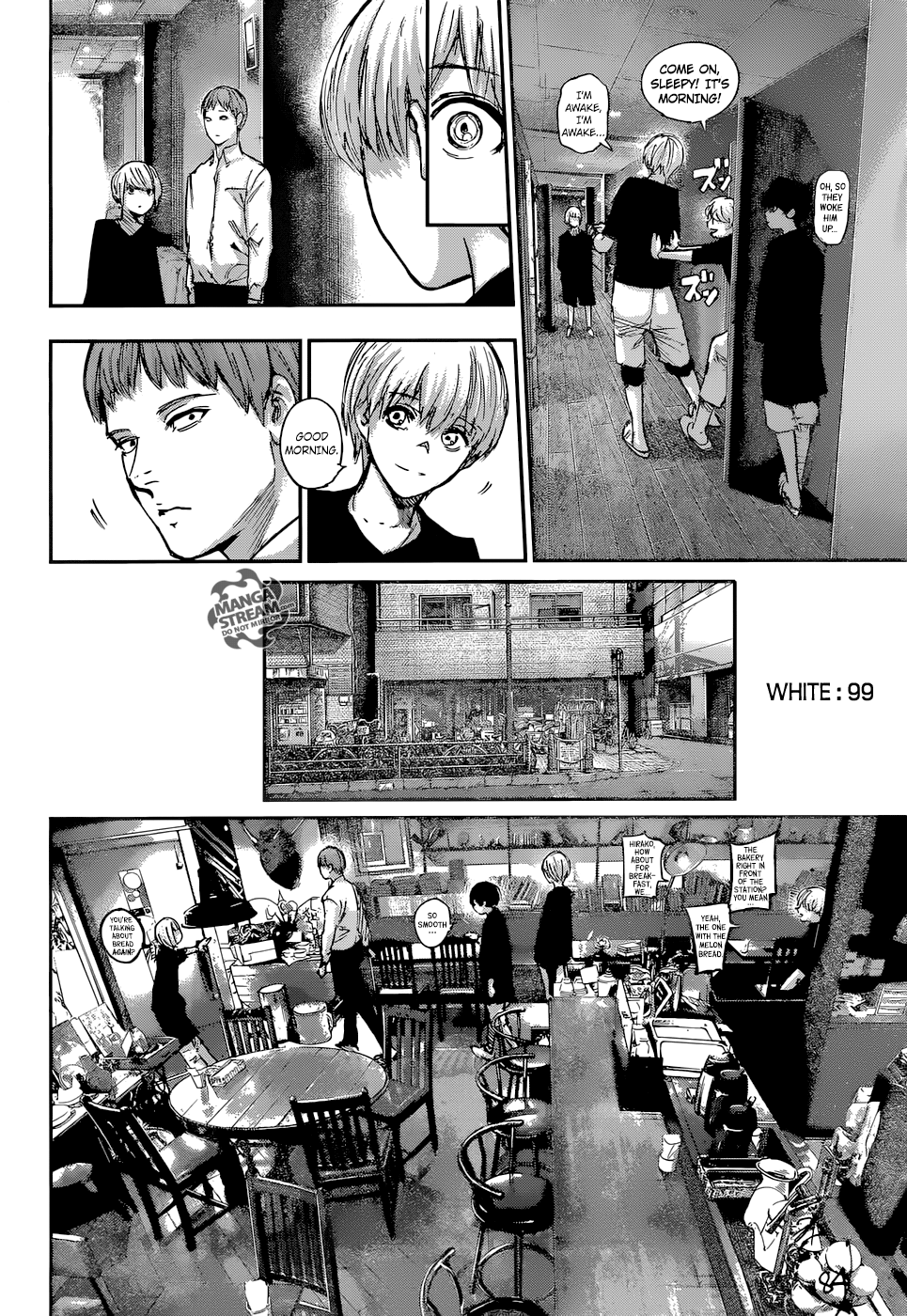 who is the woman and man?

having sometime hard times to recognize all characters , lol Ape and woman are still alive

Cyborg_Dragon Oct 30, 2016 2:44 AM
im assuming this has something to do with the recent chapter, which i have not read yet but I am still going to assume hide is in the hospital for the moment in some form of coma because if he is alive it would be the only explanation i have other than him being a clown.

Cyborg_Dragon Oct 22, 2016 1:07 PM
I watched the 3 movies for the golden age arc, and after hearing they skipped stuff in the new anime i decided to read the manga. And its is the story of "this gets worse" . My main purpose is to see if guts ever gets his revenge on Griffith i am currently on the arc where farnesse is getting an arranged marriage (i hope it ends with arson).


I know the manga goes into a load of hiatuses and where I am it looks like we won't see the death of Griffith for another hundred years. Overall its one of the most darkest and most interesting stories i have witnessed.

ADIABATICO Aug 22, 2016 4:39 PM
Danke!
He is from the TV version of the Scream franchise. It's on Netflix and season 2 just finished last week. I think you should give it a chance, it's very good!

HIPSTERMOONCAT Aug 18, 2016 11:24 PM
Bleach was always a guilty pleasure for me. While I can't say I liked how the final fight panned out, or most everything that happened in the Soul Palace, this final chapter itself was nice. I earnestly hope Kubo makes a new series soon, though maybe as just the illustrator.

Cyborg_Dragon Aug 16, 2016 12:21 PM
I don't have the links anymore however I think you can find it on any site or wiki, This one guy chibi reviews who I watch for tokyo ghoul stuff on youtube read each diary. The first was tasukiyamas father talking about his son before the rose arc. the second is hinami in prison talking about how life in there does not suck too bad and the third is bujin (fluffy eyebrows) who was at the qs christmas party who was admiring sasakis cooking of normal food. The last one was a bout torso which is a f%@ked up rambling about Mutsuki.


there is one other thing I can think explain hide being alive and a possible clown and that would be uta. Uta is the no face ghoul for example changing to arimas face during the auction raid. Its a bit odd that hide was in the sewer and knew arima was too dangerous before kaneki fought him and with all the dead ccg members it could be possible for him to sneak in with the investigators duplicating hides face and act dead when kaneki killed him (he did). It could explain why hide went missing maybe he was not even there and he met the clowns before the raid. Now why uta would do such a thing I don't know but he is a troll who took 3 of juzous knifes to the face as if he just got hit by a bbgun.


I think kimi will be confirmed hospital if we see nishiki with amon on rue island looking for torso still as you would think he might show up to the prison with the others but he ain't there.

Sorry I don't separate things I was typing this stuff while on break at work.

About Touka visiting someone in hospital I would be thinking more of Kimi who could of got hurt by torso at some point. Nishio reason was definitely related to her being hurt considering she had a scar in part one that would of attracted torso. If you think more of hide being the person in hospital I would like to hear your thoughts on it.

I have been wondering about rc depressents. They can make ghouls as weak as a human and reduce the power of their kagune. I have been wondering have washuus made a cure for ghouls but turned it into a weapon which are the depressants. In a diary for hinami in the fourth volume of re while she is in prison she notes how she is being depressed and forced to eat this weird tasting gruel and can not figure out what it is. I am wondering is the gruel something very ordinary and plain like porridge and that ghouls can eat it because of the small suppression as a result of the rc depressant but its being played off by the ccg as something else that ghouls can only eat. Why I suggest porridge or actual food as the gruel is because ghouls dont know the taste of real food.

Cyborg_Dragon Jul 29, 2016 1:50 PM
I just noticed but when did you add that thing with hide and penisman i did not see that there before and OOOMMMMMGGGG.

Cyborg_Dragon Jul 29, 2016 1:47 PM
if I was to consider what amon was doing the whole time I would assume he was trying to find any possible information on v since he was coping on the ghoul experiments by the ccg near the end of part. It could be possible in the scene "shall we begin" he showed up in re a couple of chapters ago was not at ayatos meeting but was somewhere else and what we where seeing was amons from someones perspective. the person i am guessing could be either marude or hide. My reason for marude being that amon was likely the one who killed yoshitoki with an owl kagune. We did not see marudes body so their is chance he showed up to save marude the same way ken and zero squad saved re crew. It could be possible he was talking to some members of the ccg in secret. I also could say he was teemed up with hide the last few years and it was hides perspective in that scene, marude also got information from hide about yositoki which was hinted a few chapters ago.

I think it is really possible amon and hide where working together in the shadows for the last 3 years and when ken gets back together with re crew they will show up and become part of kens army to fight v. However if hide is a clown which is suspect then that could in itself be very unlikely.

Cyborg_Dragon Jul 28, 2016 11:31 PM
in the exact same play hide is playing the role of a clown which knowing ishida is a very convenient coincidence, there is also a theory that hide has a tell for when he is lying just like how kaneki is lying when he touches his chin. there is video where on youtube where this reviewer discusses how hide could possibly be lying. (this video - https://www.youtube.com/watch?v=eO1OG7zbdKA). He also was reading a book about the clown gang in part.

I also think it is possible furata and hide might know each other as furata appeared in part one followed by the quick appearence of hide when touka was visiting kanekis university. In dealing with kaneki after rize, furata said there was some personnel business he had to deal with. Some people think that hide is alive and in the hospital touka is visiting in the early chapters of :re but she might be doing that as part of her college studies considering she wanted to do biology when she was talking to yoshimura in part one so its possible she is just there for a class and not for hide who is still a missing person to the ccg.

Cyborg_Dragon Jul 28, 2016 2:50 PM
eto and arima where only warming the seat for kaneki, since he was using a temporary one in the covers that was slowing rotting to nothing by the time he got to king. next cover we will definetely see kaneki sitting in throne.

Really good chapter it was confirming the theory, arima was hinted as king for while since he appeared on the cover of one of the first tokyo ghoul volumes with blood on one of the lenses of his glasses. I don't think we will get much out of the prison after this since aura and morgan are about to get destroyed and furata is likely going to stay out of the battle to avoid being outnumbered.

I am betting there will be some revelation on rue island as the who killed yoshitoki in the control room since it looked like he was killed by a owl kagune. Since hide was mentioned by marude I have this funny feeling he might be a halve ghoul with yoshimura kagune and was a clown in secret in the first tokyo ghoul as there are some hints of it in the first tokyo ghoul.