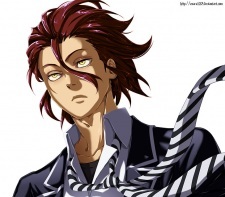 Lylaaz Apr 24, 2019 5:41 AM
Yeah, anime came out this season. Manga has plenty of chapters, though. I don't know how many episodes, you should check the anime page for it or wait until they announce it :)

You have seen Cross Game so expect something similar? Not that dramatic though (no one dies). But it has all other elements. Slice of life mostly at the moment.
So yeah, personally I like it. So far the story has only built up so nothing much has happened but i am used to the style :) Some people complain about it but it's because they haven't seen Cross Game and other series before. Haha.

icekoolkr Jan 21, 2019 2:32 PM
Nah theres a season 2 and 3 but theres also a movie in between. If you want to know the order you should watch it in, just go to the hajime no ippo page on MAL and just click sequel

icekoolkr Jan 21, 2019 11:07 AM
Basically everything. Like the training actually takes a lot of time (inside of the anime) and the progress feels satisfying. Plus the comedy is pretty good. Takamura and Ippo are my two favorite characters. Not to mention, after the first initial season, the next seasons after it has really good art. Even the original hajime no ippo has a lot of movement within the animations which is rare to see. Plus the fights are also very exciting to watch. Not to mention this show has a ton of plot yet so many exciting fights at the same time. *Little spoiler but the buildup towards Ippo and Miyata is amazing*. Let me know what you think about the show!

icekoolkr Jan 7, 2019 5:26 AM
I honestly really like diamond no ace. When I thought how good the anime looked I was really shocked at first because it looked way better than I had imagined. Especially the second season, I was shocked about how much detail went into the animation. The eyes kept on changing depending on how Sawamura was throwing.

Favorite character by far was Sawamura and I was rooting against Furuya the entire time.

But yeah at times I do feel as if there is too much going on which kind of sucks. The fact that minor characters also got some light was nice. If I had to compare it to another anime, there would be none because its just way too unique.

Also I have an anime to recommend to you which is Nijiro days. Its sorta underrated but I really enjoyed it. Its genres are comedy, school and romance (mainly). Even though there is not that much plot development, its one of the very few anime that actually made me laugh out loud.

icekoolkr Jan 6, 2019 11:48 AM
Yo! I just saw that you finished up diamond no ace and was wondering your thoughts on it

I see. I guess you are right. I just haven't watched any series for a long time with surprise romance elements, i guess.

Lylaaz Dec 31, 2018 1:45 PM
I hate harem anime in general. I remember watching some of them years ago and i always felt anger as more and more girls appeared around the main character. Why? Usually it ends with no girl getting the attention by the end of the series. So i never bothered with reverse harem either (or dropped them pretty fast).

I think you are bit wrong with shounen / romance. Shounen romance with ecchi are usually terrible but there are great shounen / romance series out there (Cross Game, Baby Steps, Beck, Ballroom) that don't have these coincidental whatever stuff and feel more close to real life.

There's so many overused tropes that i'd rather not remember them :D haha

By the way, Happy New Year (where ever you live)!

I have never been into ecchi anime.

As for in some recent animes that i have seen.. Hmm.. Do you mean series that are not labeled ecchi but have some characters oversexualised? Perhaps like Momo Yaoyorozu's outfit in BNHA?
I guess it's a way to attract the male group of viewers. I personally don't think much of it :D There have also been some funny scenes with her costume.

In Horikoshi's case he has managed to add comedy element thanks to it, so i guess if you know how to write a story it is not always bad. Sadly 90% time oversexualisation is just bad plot device in my opinion.

What do you think?

icekoolkr Dec 30, 2018 11:39 AM
To be completely honest I have actually never watched cross game. I do plan to watch it in the near future though as I heard that it is pretty good. If I had to compare baby steps, I would compare it with Ballroom e Youkoso. Whats really sad about baby steps is that there is no season 3 and they don't plan to make one as well. The best part about Baby Steps in my opinion is the progression.

Lylaaz Dec 29, 2018 1:21 PM
Exactly! I that's a nice coincidence :)
Also more funny stuff with BNHA, in anime Yowamushi Pedal there's this red haired character named Naruko. He is basically same as Kirishima. They both like red and manliness, lol.

icekoolkr Dec 28, 2018 12:50 PM
True they are very nice to newbies to sports anime. However, in my opinion its hard to decide which anime's are the best. Baby Steps is also a very good anime and Chihayafuru is a good one as well
All Comments