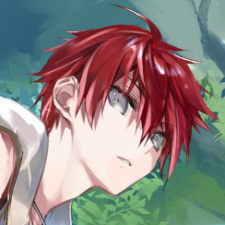 Stark700 8 hours ago
How's Dragon Age Inquisition btw? I bought the game awhile ago but never got into it. Heard it's very long in terms of content.

AzurealX Yesterday, 2:29 PM
Yeah, Falcom don't credit composers. All the composers that you know are credited thanks to a leak.
And a lot of the new stuff is credited by hardcore fans in the community who also compose music and are friends with Jindo and are generally familiar with the specific Falcom somposer's style.
Also by datamining specific OST CDs, because every composer within Falcom usually has their own prefix on the file name of a song.

Basically, all those talented composers would've been lost into obscurity if not for the fandom, because Falcom does NOT credit.
Jindo gets credited for his work because he's a freelancer and not a Falcom employee.

Koshiro's work on Ys 1&2 was not credited back then. People just know that he did them since it got revealed at one point externally, wasn't by Falcom as well.

AzurealX Yesterday, 6:59 AM
Koshiro will return to Falcom if they change their crediting policy. After he left Falcom he's made sure that he's credited in every game he's worked on.

One of his most recent projects was Streets of Rage 4. Really nice tracks there.
Also the Actraiser remake and Sol Cresta.

AzurealX Yesterday, 5:36 AM
We've actually led that discussion in the Falcom discord and other Falcom related communities and honestly, it's really doubtful that Falcom will get bought out for several reasons.
Kato - the founder of the company is also a major shareholder, it's good money for him.
The sales of Trails and Ys are nothing to write home about overall, they're really niche even if they have history - Ys in particular.
And there's the whole internal shady drama related to their music and their sound team.

Purchasing Falcom is a gamble really, because their business model and the sales they get is worthwhile for them as they are, but to a big company they'll be worthless pocket change.

Jindo has been doing less and less music for Falcom in recent times, Ys 9 and Kuro barely had anything Jindo. He's been relegated to more of an arrangement guy for Rearrange album releases. That's probably because Jindo is not a Falcom employee, he's a freelancer.

Plus, Kato is too old fashioned in his business decisions, he most likely won't sell the company until he dies.

Not saying that it won't ever happen, but the possibility they get acquired by a larger company is small. I know some people want Square to buy them but SE already has several super successful JRPG franchises that sell in a single entry what the entirety of the Trails franchise has sold combined.

AzurealX Yesterday, 2:53 AM
Yeah, definitely is.
The annoying part is, there's no real clarity on whether Unisuga actually departed or if Falcom have just put him on a SysAdmin position away from music, since they have to elevate their golden goose Singa. So basically it's not even fully guaranteed that we'll get music from Unisuga in different games.

Also yeah, most CS fans have no idea of Falcom's history and how CS changed them for the worse. They just view it in their narrow lense since they started with it. A good chunk of them probably have no idea what Gurumin or Zwei is.

AzurealX Jan 18, 3:38 PM
It's ok lol.
I generally keep my comments on at all times cause I'm kind of confrontation-hungry as unhealthy as it is lol.

But yea, specifically the Sen fans from the fandom are the most toxic in the Falcom circles from what I've noticed. There's a specific user on r/Falcom and on Falcom-related Twitter posts called Sunnyseviper and he legit searches for months old posts mentioning Cold Steel and starts shit with the people lol (including me). Legit experiences like these are the only ones I have with Sen fans and then they whine that they're ostracized from the rest of the Trails fanbase.

bioeffect Jan 18, 2:59 PM
Yea I woke upto it as well. Insane how they spent almost $70 billion on it. To put it into perspective their last biggest acquisition was Zenimax media which costed $7.5 billion and before that they bought Minecraft for $2.5 billion both of them look tiny in comparison. I never really cared much for their games but nonetheless this is good news for PC gamers as these games will still continue to come on PC and better yet if MSFT gets rid of battlenet and puts all those games on Steam it's a plus for us. It's pretty crazy how most of the prominent Fps franchises belong to MSFT now Halo, Doom, Wolfenstein, Cod and Overwatch. Battlefield and Destiny are the only other prominet Fps series that MSFT doesn't own yet.

Activision Blizzard have been coming under fire recently for the harassment and abuse their employees have had to put up with if MSFT can get rid of the corrupt higher ups especially their scumbag Ceo Bobby Kotick then this be would good news for them.

It feels like only recent memory when PlayStation fans would mock Xbox for not having any exclusives, infact this was the biggest criticism made towards them during the PS4/Xbox one era and man did MSFT completely obliterate that criticism. All of these games will come day one on Gamepass. Gamepass is looking a better deal with every move MSFT makes.

They literally have enough money to do it.

Tannhauser Jan 18, 8:02 AM
To be fair, that other guy is pretty much the opposite - a sardonic Sen hater, so I guess it's a match made in heaven.

Tannhauser Jan 18, 7:04 AM
Both aggressive fans and haters are weird, man.

Stark700 Jan 18, 6:57 AM
Besides Overwatch, Starcraft, and Warcraft III, I don't really play much Blizzard games. Still, a huge news for the gaming industry.

It makes me worry about the future with monopoly though.

bioeffect Jan 14, 2:32 PM
Yo are you planning on playing Gow 2018? It just came out on Steam today, amazing game with an amazing PC port, no denuvo and it costs $30 Cad less then FF7R. I'd recommend checking it out.
All Comments