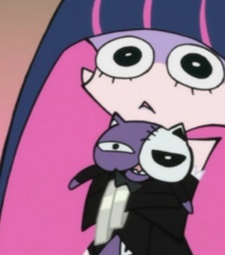 jgomezg Sep 12, 2016 12:06 AM
I find your Code Geass review rather silly, both personally and intellectually, but I hope you're doing well.

TakamakiJoker Sep 15, 2015 6:23 AM
I personally cant agree with your Code Geass review tbh.
BTW you must be a gainax fan am I right?

busterbeam May 26, 2011 8:47 PM
well sorry I'm gonna watch Cobra instead because I did the first episode sample and I like it more

I saw your comment about Cobra's expressions and I agree... actually in general he's douchey as hell but very fun to watch regardless.

I'm watching a lot of 60s/70s anime now and I might pick that up to go along with Conan.

AHR May 17, 2011 12:37 PM
Well my contract ran out recently, so I thought I'd make the most of my unemployment, lol. It's easy to do when everything you're watching is actually good!

AHR Apr 23, 2011 1:12 AM
It's fucking awesome, despite it being really dumb. It also looks way better than I thought it would for a TV series. I guess it'll inevitably drop in quality, though? Episode 4 is probably the highlight episode out of the 5 I've seen so far.

I guess I'll have to check out the movie too, seeing as it has Miyazaki, Shinji Otsuka, Utsunomiya, Morimoto and Ryutaro Nakamura... I've seen a few in the TV series credits but FUCK.

lafiel Mar 5, 2011 1:59 PM
Hello 7th. You know me, but I have actually been a great admirer of you for quite some time. I feel connected to you since we both post at GAF and happen to share similar taste in terms of film and music. My friends always link me your posts to criticize you and your love for the animated part of animation. But I always defend you for your general good taste in everything, I also agree wholesomely that directing without good animation is never good directing and literally love you for standing up for the idea. I’ve made fun of your tripfriend nonoriri in private chats, but I did it mainly because I was thinking of you.<3

PS – I’m not actually a big holocaust denier like that poster before me and want to know your opinions on the issue. Get back to me.<3

busterbeam Feb 16, 2011 12:25 PM
I started it in 2007 but never got around to finishing it ;_; will do so once I'm done with Future Boy Conan and the two Yuasa shows that I've also yet to watch in their entirety

busterbeam Feb 15, 2011 1:46 PM
Hello, I don't care how creepy this will sound but I just thought I'd say that you made me appreciate animation to a huge extent more than anyone else ever did and I am rather grateful >: