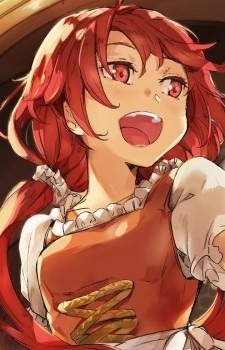 TomatoSempai Jan 13, 2019 2:22 PM
I saw you changed your profile description, what happened, comrade?

Togata- Jan 6, 2019 4:08 AM
Narrator won't be there in the VN though, just added it in that preview for the audiobook release. Those facial expressions, etc won't be there too https://twitter.com/FloPerfecto/status/1058098090178174977 And no JP voice is available which is already confirmed(till now that is). So yeah not many attractive features other than the Alchemist sprites.

Well "recycled" characters will be always there lol for those names and all, had them in Rose guns days too. Seeing that preview I think it will retain that action, flamboyance of RGD and mystery setting of WTC series(they mentioned about a festival or something so yeah). Expecting lots of political action too since there are so many factions from all over the world so yeah, looks promising so far definitely(only sad news is that no zts was mentioned here).

Togata- Jan 5, 2019 9:42 PM
Well yeah Requiem had a few pacing issues just like the main VN last door but honestly my favorite thing about the VN was how Jacopo's character was portrayed with his inner turmoil, one of the best written characters in VN for me. Morgana also got her own characterization(she got her backstory in the main VN salvage chapter though) which is a good thing, if anything it helped in clarifying events of the last door. Supplementary stories were alright but I liked Imeon's character.


Haven't tried the patch but looks like a good one with some much needed updates https://www.reddit.com/r/visualnovels/comments/9v76tp/ever17_himmel_edition_released/ Hope you have the patience to complete it though since ever17 has quite a few pacing issues, until you reach that amazing true route.


It's alright. Honestly I don't like voices of some characters like Natsuhi and Battler, but if this means more popularity for umineko then it's fine. We will see anyway how the project develops since the starting hasn't been great.

Honestly I am more hyped about umineko saku and ciconia no naku releases this year.

Togata- Jan 5, 2019 3:40 AM
You should complete the fata morgana fandisc (Requiem for innocence) instead, it's short anyway. :P

Anyway haven't read all of them though(in fact only one), chaos;child I heard mixed opinions about the ending, muv luv I dropped it midway as it was too boring (which I expected until you reach Alternative). Have been planning to read Rewrite for a while so can't say anything about it, didn't read Little Buster. I would recommend ever17 if only you have patience, it has one of the best VN format in mystery foreshadowing and setting up, but some of the routes have quite a few pacing issues. True route is fantastic though.
Another option is Rose guns days but you already know about that.

Same, I want to read OP because of the hype around it too, not sure whether I will like it that much though. I think current Kingdom arc is a bit hit or miss, but pretty interested to see what Ousen and Kanki are planning.

Tbh I think for those who read higurashi before with Mion/Shion, the twist in umineko shouldn't seem too far fetched. I think umineko is fascinating how it combines the concepts of imaginary friends, personification of conflicting feelings, escapism etc.

Indeed KnS title tracks is one of my favorite vn ost.

Ah I see, yeah you need to have some knowledge about Shinza verse series as a whole to gain some interest in it. There is a Bey spinoff, there is Kajiri Kamui Kagura which is a what-if scenario branching off from Marie route/world, and then there is another VN called Paradise lost. All of them are untranslated but I have gained some knowledge by doing some research while looking up various discussions, guidebooks, wiki etc


Lol I see, still though Rea route had Rusalka's best moments along with that epilogue, backstory and all. Yeah same, waiting for full translation

I think the vagueness in the VN solutions caused those theories(which isn't bad, since finding your own solution is one of those themed) but the manga pretty much confirmed the actual theory and that's the only thing which makes sense overall. Like I will really like to see how Rosatrice theory explains Kanon/shanon talks in ep 2

The content isn't anything too different from last door, but it's mainly how the characters are fleshed out more. Yeah, especially how Jacopo character was portrayed. Rise, fall and then how he eventually succumbed to his own downfall, really some wonderful characterization. The ending of main ep especially is a satisfying payoff, one of the best moment of the series for me. Definitely worth a try at least for that.


Hmm that's true definitely, although some of the scenes went overboard maybe.

I think KnS is a bit weak and doesn't have many strengths, but somewhat liked its sequel, especially its atmosphere and interactions. Also KnS2 op is one of my favorite VN op.

Since you are a fan of Dies Irae, have you been keeping up with the updates about Pantheon, the mobage? Definitely some interesting news with lots of interesting characters to be featured like Mithra and Muzan, the prologue was released a few days ago(not translated though).

also since you are a Rusalka and Beatrice fan, keep an eye on this even though we don't have the full translation yet https://www.novelupdates.com/series/dies-irae-song-to-the-witch/

Togata- Nov 2, 2018 9:46 PM
Umineko manga art is definitely inconsistent but answers arc, especially ep 7 and 8 have more clarity and better parts. Like ep 8 Ange/sayo talk or even the much needed side story for Sayo's characterization makes it better.
Whatever it maybe, only the official theory made sense thematically/narratively, not Rosatrice or others

FM fandisc starts off a bit slow and out of place(mainly because the focus is entirely different from the original vn) but definitely worth it. Especially because it adds much needed characterizatiom for Jacopo and Morgana which was absent in last door because only seen from Michel's pov and their relationship was more meaningful.

I felt subahibi mystery is more basic, but its narratives and philosophy resonated more with me. Kimika is second best girl for me. ;)

Togata- Nov 1, 2018 7:31 AM
I enjoyed ep 3 the most, probably the best umineko had to offer with every aspect properly placed.

I don't think there were unstaisfying answers actually in terms of narratives, umineko is one of the few where looking back thematically the official answer makes the most sense. In terms of mysterywise there are lots of trolling and bit twisting of words(translation plays a factor too) and a few flaws like I said. Also I think as a whole, ep 7 and 8 manga answers arc is better than the VN counterpart, storywise.

>It's not just mysteries that was great about Umineko, but also about the characters, theme, semi-fantasy aspects as well as world building and god damn that PS3 art is really sick + the majestic music, it truly lives up to its reputation according to the vndb ranking.

Definitely, I think some people are too focused on the mystery aspect of vn that we forget the journey, so many interesting layers of themes to explore.

Another VN which gave me a same satisfying feeling was Fata Morgana(which was also quite similar to umineko in terms of themes), in fact was quite surprised with how its fandisc Requiem for innocence provided some of the best moments of the series too. And maybe perhaps subahibi too, about which I wrote a blog here about its narratives if you are interested.

Togata- Nov 1, 2018 4:55 AM
I think as a whole since I am rereading it right now, umineko questions arc is more polished. The locked rooms, the logic battles, the foreshadowings, have the best usages here and in terms of mystery is quite rewarding. It's true that ep 4 have some pacing issues, but still it remains pretty great.
Answers arc on the other hand, in terms of mystery had some issues, like where Erika sees Shannon/kanon in the same room and to cover that, you have to assume a some things as unreliable narrator and absolute detective perspective(which are far fetched imo). However answers arc is also quite a rewarding experience overall because the vision and themes and umineko come to full fruition here, and some of the segments are really entertaining to say the least.

I completed higurashi manga a few days ago and wasn't entirely satisfied with its mystery aspect, but still a good series with its themes and characters.

Rose guns days is pretty good. Probably one of the most entertaining VNs I have read, with a colourful cast and dealing with economic, social and cultural issues. Quite different to WTC series.

>I've heard that another instance of Umineko is about to be release in the future but we dont have any info, wonder what's it gonna be about.

Only info we have, heard we will get a different setting for new WTC, we will see.

Togata- Oct 31, 2018 9:35 PM
So you haven't read it? I see. I was just wondering, since a higurashi fan's opinion about umineko will be interesting to see.

Great taste I see. I assume you have read higurashi already, did you read umineko too?

TomatoSempai Oct 14, 2018 6:41 PM
Hello fellow comrade, Can you recommend me a good VN (i don't really care about lenght or genre)?, greetings, comrade.
All Comments