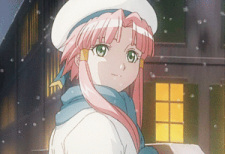 Shymander Feb 9, 3:57 PM
Mirio did indeed carry the 4th Season and will continue to do so until Jiro gets her spotlight.

Hrybami Feb 8, 9:41 AM
Thanks, Shinsekai yori is something else. The show is mostly about the worldbuilding. It has a very slow start. But the last 7 episodes of the show are some of the most intense episode I've ever seen in anime.

Aria the Origination is often considered as one of the best conclusions of an anime franchise. Amano-sensei is an amazing mangaka. Many fans don't realize that Aria in its core is a philosophical masterpiece. It is actually a post apocalypic setting when Manhome (Earth) conceded to human and lost its natural wonders leading human beings to create this utopia called Aqua (Terraformed Mars) because of their past mistakes. The name Aria in Italian means Tranquility ofc!

Wow, as I am replying my headphone started to play Kin no Nami Sen no Nami! What witchcraft is this?! O_o

shanimebib Feb 6, 12:48 PM
Make sure to watch the OVA Arietta before starting the Origination. Very important that that you do that.

This anime sold over 30K discs per volume of all three season in Japan. I hope you understand what that number means. Only K-On and Love Live sold more than ARIA as pure SoL anime ever.

shanimebib Feb 6, 12:35 PM
Hohe~ But it is the Origination that made it into a masterpiece!

Hrybami Feb 5, 10:41 AM
Nice favourite btw. I remember you from the forum, but I never got a chance to talk with you.

Ryuseishun Feb 4, 8:24 PM
Symphogear XV is probably one of the best anime series I’ve seen in general within the last few years, barring Violet Evergarden and Hunter x Hunter. Tbf, it was basically a culmination of everything built up from the all the previous seasons. Yes, the action is quite amazing and for me personally it’s a lot better than even the majority of most action shounen in the last few years. I guess singing while dancing and fighting aliens and god’s really does the trick, even though it’ll seem like one hella weird concept at first xD

Ryuseishun Feb 4, 7:36 PM
Lol, looks like I’m not the only one really buying into Eizouken, thank god xD

Wallanimx Jan 31, 3:05 PM
Thank you for the information! Saw your profile and just gotta say "Mirio carried the first half of season 4" is the truest thing anyone could have said. <3