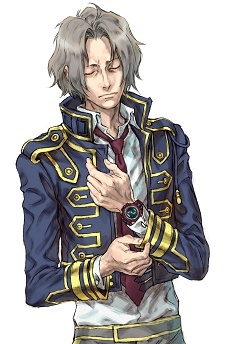 I was just searching through our conversations trying to find some information i discussed with you where we chatted bout final fantasy XII in depth. Cause a friend of mine is kind of wanted to know what type of game he should play, Final fantasy IV, IX, X, XII, XIII, or Chrono trigger and and chrono cross. xD

Anyways i'll just have to rewrite alot of my information. I should of blogged some of it. I remember we used to talk up a storm about Final fantasy XIII lol

So how is your gaming going this time. As for me, i got so many new games now. Last year was really an amazing year to be a jrpg fan for the newest generation systems. Also this year is really looking up with all the new vita titles and Feb. and march in particular alot of great games are coming out.

So yeah its been a very long time we chatted on here and i just wanted to see whats new with you lately.

Hi! Woiuld you like to join One Piece CardShop (O.P.C.S) ☆ ★or just look around and see if the club interests you. Thank you! (✿◕ ‿ ◕✿)

link9us Feb 3, 2013 2:55 PM
Hey man long time no see. What you been up to. Alot of great games have been recently released. Like Last story, Pandora Tower and Ni no kuni just recently.

Operation Rainfall was a success :)

Anyways since your a huge fan of Dragon Quest, i can't tell you enough to play this game, this is one of the marvelous well put together games ive ever experience in this generation of consoles. Level 5 combined with studio Ghibli. The visuals, the animation, the music are just outstanding. One of my favorite jrpgs in a very long time, anyways since your such a fan of level 5 games and dragon quest general, i highly recommend it.

Also Pandora's Tower and Atelier Ayeisha is coming out in march, you might want check out those two.


Also, I'm not sure if you're aware of this but Pandora's Tower has been licensed for a release in America thanks to XSeed, so you should be able to play it soon.

Is that so? That's a shame 'cause I always enjoy fighting in Symphonia. No matter, I'll end up getting it for Christmas anyway because I want to get Symphonia over and done with. I did find it odd that the sequel came out long after the original, so I thought it would be unnecessary.

I'll consider it, it's not on my list of priorities at the moment, and the more I see of it, the less I want to get it - well I'll find out at some point anyway.

Also, I'm considering getting Lost Odyssey, Infinite Undiscovery and The Last Remnant, do you know if any of them are worth it?

Masserati_ Nov 11, 2012 4:03 AM
I played the demo of VLR last week and I was really impressed by it, I'm now really looking forward to getting it, definitely my highest priority game this Christmas.

I have to ask have you played Dawn of the New World? I've heard it's not meant to be anywhere near as good as Symphonia. I currently only have the one Gamecube controller so multiplayer isn't an option for me at the moment; I'm looking forward to playing Abyss and Vesperia as well - and Xillia is looking better each time I check on it. I'm still on the fence on Graces F though, I've heard all sorts of mixed reviews about it and didn't look that impressive to begin with.

Masserati_ Nov 3, 2012 11:33 AM
Apologies for not getting back to you sooner on this, I have no excuse as to why - general laziness and becoming addicted to Symphonia are probably my main reasons.

I remember playing The Azoth of Destiny (the second game in the Iris series) and enjoying that quite a bit. Aside from that, I've heard that the Atelier games are meant to be pretty average overall, although I wouldn't mind playing them at some point in the future.

Originally I played a demo of it for the PS1 and was captivated by it, then my younger brother ended up getting the Wii version so I've played (but not yet completed) that version. I've decided that I'm going to get the Vita version of Zero escape, it's meant to be marginally better than the 3DS version anyway (I can't remember if I told you that in the past or not).

Whilst I remember about Symphonia, I'm really enjoying it. I've had this week off due to a break from college and when I wasn't busy catching up on this season of anime I was playing Symphonia non-stop. It's also finally come into its own now that I'm in Tethe'alla and have all the party members (as far as I'm aware, Regal is the final member) and it's just such a good game to play.

Masserati_ Oct 22, 2012 2:45 PM
2D battle systems automatically make me think of Atelier Iris, which was pretty good. Although, having now played Symphonia (I got it today) I'm not so sure how a 2D battle system would work - I'll have to find out when I eventually get some of the handheld Tales series, they're surprisingly cheap.

Klonoa was a fantastic experience, sadly, I never actually played the second one although it's rather cheap online, I'm going to try and get it for Christmas along with Zero Escape.

I feel almost cheated by that.

Masserati_ Oct 20, 2012 8:13 AM
Thankfully, it looks like I may not need to bid after all, there's a guy at my college who has the game so I'm buying it off him, I look forward to being able to finally play it. Gameplay's out the window? Why's that? Indeed, Namco doesn't seem to like distributing things over in Europe to begin with, the Tales series seems to be one of those things.

Yeah, it's a shame that Kirby often gets overlooked as much as it does, they're very good games that just make for pleasant fun, the more recent ones especially, I kind of get the same feeling playing them as I do when I play Klonoa.

Damn, I keep thinking that something will happen if you unlock all the information - although I'm probably wrong. It does take a ridiculous amount of time to actually get any information at all though, so I can see why you wouldn't.

Masserati_ Oct 17, 2012 3:06 PM
I have yet to play a Tales game, I'm currently in a bid for Tales of Symphonia (I've lost 3 times now) it looks like the kind of game I would enjoy - I wouldn't mind playing Legendia, although I'd need an NTSC PS2 first.

Epic Yarn was a great game, really relaxing and it was just so inventive, I prefer Epic Yarn to Kirby's Adventure Wii any day.

Glad to hear you finished it, the game is totally worth the effort - did you complete all the background information stuff by the way? I tried for ages and couldn't get everything to fill out all the lore.

Masserati_ Oct 17, 2012 1:59 PM
Almost finished on The Last Story, I'm glad about it too. Towards the end the game starts to run out of steam for the story, it's been a good ride up till this point but it is starting to drag on, if it ends how I think it will, I'll be happy.

Another issue that's bothering me is that combat is becoming far too easy - the characters pretty much level up after every fight later on 'cause the enemies offer so much experience - the only really big threat to the party are the bosses which borderline on frustratingly difficult (I won't spoil it, but there's one boss in particular that almost drove me insane as the deaths it dished out were cheap). I think the problem with it is that the enemies aren't really posing much of a threat, but take a long time to kill.

Also, Zael has to be one of the most overpowered main characters I've played as for a long time; it was cool and all playing as the tank of the party to begin with, but his move-set later on becomes almost God like to a degree where it's not even funny.

With that being said, the game is really fun, the characters have a lot of chemistry between them which makes for a lot of genuine humour - I was admittedly a bit disappointed by Zael's character, early promotional art led me to believe that he was actually a competent, confident male lead who knew what he was doing and would be a different main character from what I'm used to seeing - he's a good character though, so I'm willing to forgive that.

Despite my gripes about the combat system, it is rather fun to fight in the game, seeing as the combat just flows so well and - loathe though I am to admit it - Zael's moves are good to use, even if they do make you feel horrendously overpowered (the game doesn't try to hide it either).

Also, Nobuo Uematsu made an absolutely amazing score for the game: