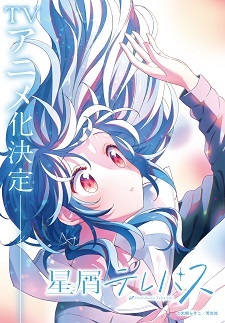 Ookuma began drawing the sci-fi comedy manga in Manga Time Kirara in June 2019. Houbansha shipped the second volume in September 2021 and scheduled the third volume for an October 27 release.

Synopsis
Fifteen-year-old Umika Konohoshi is having a hard time socializing at school, but she hopes her words will someday reach other people. When self-proclaimed alien Yuu Akeuchi enters her life, Umika will learn more about being open.

Didn't know this GL existed! Going to check it out and see how it is before watching the anime :)

cute premise just put this on my reading list now.

This is one of the reasons why I don't like the yuri community. "Will there be enough yuri?", damn. As if for all of you this is just fetish fanservice and not a full-fledged lesbian relationship genre.

This is just the ideal-extrovert-girlfriend-fantasy that's been done a million times before. Out.

Bruh I thought this was a sequel to ground control to psychoelectric girl :( Cute premise, hopefully there's enough yuri and cute moments in this to make it decent.

Glad to see an announcement for a new Kirara adaption. With Bocchi starting this weekend there were no more adaptions announced, so I was wondering when we'd get an announcement. I had checked the manga out in the past and it seemed cute - and I'm also here for the yuri, so sign me up.

Also, not really sure why, but I wasn't expecting this to get an adaption. I don't really know what I would have expected, but I guess a lot of the older and a few of the newer Kirara are finishing, so there aren't really that many ongoing manga to choose from that might be worth getting an adaption. Though, disclaimer, I have no actual insight into this topic, it's just me guessing. Either way, I'm looking forward to it!

Nanaca said:
Hardly the sharpest tool in Kirara's shed. Don't they have a lot of better things waiting for a sequel?

I thought about it too. Previously, they adapted all new works because their anime came out too often. But now there are much fewer of them, but they still adapt too small titles.

Devil-san said:
Urgh..!!
Hard pass...
For me too. Let fans of Girls Love genre watch it.

Hardly the sharpest tool in Kirara's shed. Don't they have a lot of better things waiting for a sequel?

Dunno what to expect from this but I'm seeing that this is a yuri manga so eh I guess lol, I'll check it out

Piromysl said:
Seems like an actual yuri anime to sate the hunger of the fans of the genre.
I hope this will quell them.

It is unlikely, shipping bait shows will still be more popular. Only if this work is not something like a new Bloom into you, which I doubt.