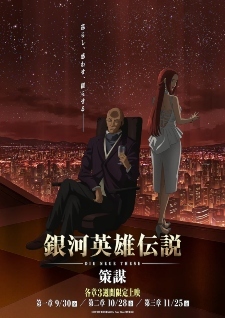 The official website of the Ginga Eiyuu Densetsu: Die Neue These anime series announced a new trilogy subtitled Sakubou (Strategy) on Friday, revealing a teaser visual (pictured). The first movie will open in theaters on September 30, with the second and third movies premiering on October 28 and November 25. The trilogy will screen for a limited three-week release.

The third season also premiered as a trilogy—comprising four episodes each—on March 4, April 1, and May 13. Crunchyroll simulcast the series with subtitles, while Funimation streamed an English dub.

Yoshiki Tanaka penned the ten-volume original space opera novel and side stories from 1982 to 1989, selling a cumulative 15 million copies. VIZ Media published the novel series in English between March 2016 and November 2019. Ginga Eiyuu Densetsu won the Seiun Award for the best novel of the year in 1988.

Man, I'm so far behind and also lost in the continuity of this.

I love it, can't wait to watch it all

the economists and religious side will have more spotlight huh

Haha, I kinda forgot about the second half of S3 since they announced it earlier, I guess they rebranded it as S4 and not S3 part 2. And it starts in 4 months as well, which is better than expected.

i wish it gets more than just 12 eps... otherwise it will end around ep 47 from the old OVA, tight before a long awaited moment happens, it would be such a cucked ending

I haven't started the new season. I gotta keep up before this. Waiting for the dub to finish.

Damn, I thought it was scheduled for Summer, not Fall, but I'll take it. Cool teaser, the focus of the show is slowly shifting and that teaser represents that well. I can't wait!