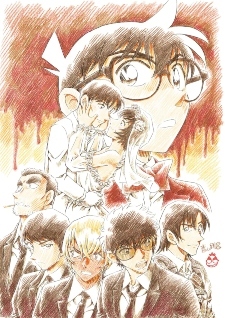 The official movie website of Detective Conan (Case Closed) announced on Wednesday that the 25th movie Halloween no Hanayome (The Bride of Halloween), will open in theaters in Japan on April 15, 2022. The website also revealed the main staff, cast, and a teaser visual (pictured) drawn by the original manga creator Gosho Aoyama.

Synopsis
Shibuya, Tokyo, is bustling with the Halloween season. A wedding is being held at Shibuya Hikarie, where Detective Miwako Sato of the Metropolitan Police Department is dressed in a wedding dress. While Conan and the other invited guests are watching, an assailant suddenly bursts in, and Detective Wataru Takagi, who was trying to protect Sato, is injured. Takagi survived and the situation was settled, but in Sato's eyes, the image of the grim reaper that she had seen when Detective Matsuda, the man she had been in love with, had been killed in a series of bombings three years ago, overlapped with Takagi's.

At the same time, the perpetrator of the bombings escapes from prison. Is this really a coincidence? Rei Furuya (Toru Amuro), a member of the public safety police, is hunting down the man who killed his classmate, Detective Matsuda, but a mysterious person in disguise suddenly appears and puts a collar bomb on him.

Conan visits the underground shelter where Amuro is hiding out to disarm the collar bomb, and hears about an incident three years ago when he and his now deceased classmates from the police academy encountered an unidentified virtual bomber named "Plamya" in Shibuya. As Conan and his team investigate, a disturbing shadow begins to loom over them. (Source: Crunchyroll)

The 24th movie, subtitled The Scarlet Bullet (Hiiro no Dangan), opened in Japan on April 16 following a delay from April 2020 due to the COVID-19 outbreak. The movie grossed over 7.52 billion yen (approximately US$66.27 million) at the Japanese box office.

Gonna watch this just because of Susumu Mitsunaka. Fell in love with his exceptional direction in Haikyu S1-3 and from then I always look forward to enjoying more of his work.

xxmsxx said:
Also, back in January 2020 (before M24 was released), at the annual Aoyama talk day, he already revealed it was going to be Takagi and Sato, as well as the five PA members.

I didn't know that

Adampk said:
So the teaser at the end of scarlet bullet was indeed not of Police Academy Arc.

The end of each film always preview the next film. Also, back in January 2020 (before M24 was released), at the annual Aoyama talk day, he already revealed it was going to be Takagi and Sato, as well as the five PA members.

Looks like France has a tentative date for premier already?
Edit: Spain seems to have one too.

Very excited for this movie, i really like the characters of the promotional poster and the Pv looks great.

Something this important should be in the main series, movie quality for their wedding is good though.

HELL YEAH!!! love it when my fav anime gets a new movie every year <3

Man, the series is older than me.

Should've waited to release it in Oct 2022 but oh well.

This sounds very enticing....I'd watch it if given the chance to

So, Conan just became one of those shows where the characters never get old?

So the teaser at the end of scarlet bullet was indeed not of Police Academy Arc.

Anyway I am excited, lot of tooru amuro involved works announced for next outing

Finally Takagi and Satou will be married ?!
..Or not?

Anyway I'm excited for the movie!

I was just about wondering how many movies Detective Conan actually has lol
Too bad I dropped the manga cuz idk when it's gonna end and the main conflict kinda felt like it dragged along at points...