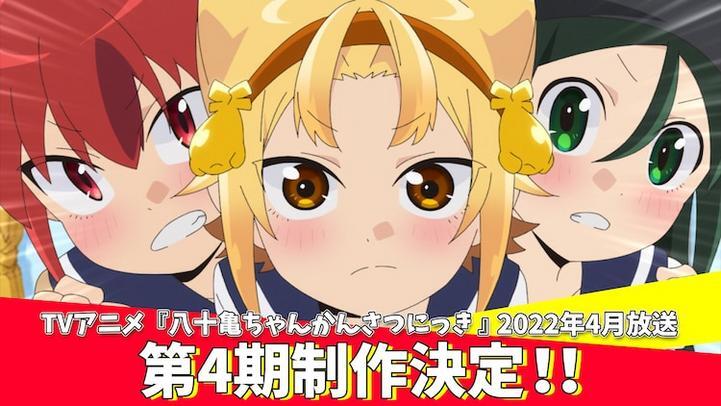 The official website of the Yatogame-chan Kansatsu Nikki anime series announced a fourth season on Tuesday. The new season is set to premiere in April 2022.

Synopsis
After growing up in Tokyo, high school student Jin Kaito moves to Nagoya where he meets Yatogame Monaka, a fellow student who puts her Nagoya dialect on full display. With her cat-like appearance and unvarnished Nagoya dialect, Yatogame won't open up to him at all. This popular local comedy is increasing the status of Nagoya through observation of the adorable Yatogame-chan! (Source: Crunchyroll)

The cast from the first three seasons will reprise their roles. The main staff of the third season, headed by chief director Hisayoshi Hirasawa, will also be returning for the new season. Hayabusa Film will produce the new season with cooperation from Creators in Pack, which co-produced the previous seasons with Saetta.

The first and second seasons aired in Spring 2019 and Winter 2020 respectively. The third season, produced by Creators in Pack and LEVELS, aired in Winter 2021. Each season consisted of twelve 3-minute episodes.

The anime series adapts Masaki Andou's 4-koma manga which he began on Twitter before Comic REX started serializing it in May 2016. Ichijinsha published the tenth compiled volume on May 27.

Good, I'll note that down for when I get around to it.

This gets a fourth season, and here I am still waiting for the second season of D-Frag to be announced.

AkeZZZ said:
Maybe in the next few years, we will hear the news about 'Yatogame-chan Kansatsu Nikki' Receives the Tenth Season.

Imagine if in future seasons they travel to other countries and the characters start arguing with the citizens of other cities, lol. I'm afraid they won't have enough Japanese for a long time.

Maybe in the next few years, we will hear the news about 'Yatogame-chan Kansatsu Nikki' Receives the Tenth Season.

I would watch it even though its pretty boring anime.

MichaelJackson said:
lol, I didnt even know it recieved a third.

Recieved it. There were even characters from other cities that were salty because of Nagoya.

lol, I didnt even know it recieved a third.

The fate of this show made me believe that the Nagoya Department of Tourism has more money than Riot Games.

Nice, I'll certainly take more of this one, simply for the bits of info on Nagoya and the surround prefectures.

Teekyuu is trembling on its sit.

lets goo.
looking foward for it

yoo, did not expect this show to get a fourth season but I’m really glad since I enjoyed it quite a bit for it being a short show

Will this show ever die?