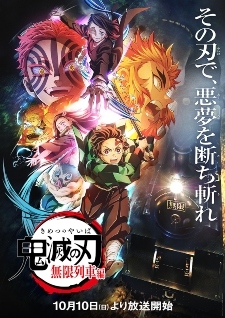 The television premiere of the Kimetsu no Yaiba: Mugen Ressha-hen (Demon Slayer: Kimetsu no Yaiba - Mugen Train) anime film ended with a promotional reel on Saturday, revealing a new cast, broadcast info, and the theme songs for the second season.

Crunchyroll and Funimation will both stream the second season and Mugen Ressha-hen television edit as it airs in Japan.

Kimetsu no Yaiba adapts Koyoharu Gotouge's supernatural action manga, which ran in Weekly Shounen Jump from February 2016 to May 2018. Shueisha published the manga in 23 volumes. The manga has a cumulative 150 million copies in print.

The first anime season premiered in 26 episodes in Spring 2019, followed by the Mugen Ressha-hen anime film on October 16 last year.

HAH LOLS, RE-watching the movie TWICE to see what the movie couldn't splice in content from the Mugen Train arc?

Will I watch the movie 1st to get the context?

Mugen train arc has a separate entry on Mal right now so will the Yuukaku hen start from ep 1 on on dec 5th or will it be ep 8 (that is if mugen train arc is combined with the yuukaku hen season)?

Mugen Train arc turned into TV series, with some additional content? Sounds good for me! :-)

I hope it's gonna be a separate entry on MAL. It should be, in my opinion.

RobertBobert said:
Dab1za9 said:
RobertBobert said:
Who read the manga? How many seasons, ova or films do you think they need to cover the whole story? I really hope they don't use the Neverland and Bokutachi move.

So, compared to other hyped shonens, this manga don't be that long?
I expect a Film trilogy for the final arc also tbh

I liked how the anime will come back!!!

The leaks are true they gonna air Mugen train arc first for 7 weeks and thenew arc on Dec 5. And the anime announced for 2cours, so my prediction its gonna be 20episodes

Sadly, we don't got information about seiyuu who will voiced Gyutaro, Douma and trio Tengen wives.

But at-least, we had got Aimer who replaced Lisa Oribe as a singer in OP & ED and Miyukichi who join this casts and get reunion with genshin impact casts (like nezuko, kanao and shinobu), fate series, psycho-pass series, fairy tail x eden zero casts (both series has miyukichi in that series) & monogatari series.

So, we will see miyukichi as villain (thought she ever voiced a villain in symphogear and 1 piece) in 5 dec and battle with stone ocean (if miyukichi voiced jolyne, it will be battle between daki vs jolyne since both chara are voiced by her), AOT season 4 part 2, & JJK movie part 0 (before geto join dark side)

I totally don't understand these rerun ep. Recently a movie came out, and here they are squeezing 7 episodes of almost the same material. They could just make a special episode of the new scenes.
Wtf are they counting on more money or something?
I'm not a big fan of this anime but the second season is fun and I'm disappointed that there will be reruns first

so its true Mugen Train will become part of the TV sequel and its the first 7 episodes of it, might as well check out the new additional scenes once they hit the internet

My body is ready, I am super hyped to rewatch the movie again and super pumped for season 2 with aimer at the helm for both the op and ed.

I love that they cast Miyuki Sawashiro for Daki... she is one of my favourite voice actress

Dab1za9 said:
RobertBobert said:
Who read the manga? How many seasons, ova or films do you think they need to cover the whole story? I really hope they don't use the Neverland and Bokutachi move.

So, compared to other hyped shonens, this manga don't be that long?

RobertBobert said:
Who read the manga? How many seasons, ova or films do you think they need to cover the whole story? I really hope they don't use the Neverland and Bokutachi move.

Who read the manga? How many seasons, ova or films do you think they need to cover the whole story? I really hope they don't use the Neverland and Bokutachi move.

Can't wait for the second season any longer!

Yo Aimer gonna do the theme songs.

Finally some news about this. I was confused since Fall season is right around the corner and this was listed as airing this year, but there was no actual information or details. Wish they would just jump into the next arc right away but oh well. Aimer's songs are sure to be bangers though.

Lmao what's the point of watching the Movie then?
If i can just watch this?
I feel betrayed.

Really why would they complicate things this much,but this season sure will be a step ahead of the first one