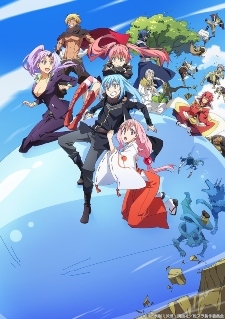 An anime movie was announced following the 12th and final episode of second season's second cours of the Tensei shitara Slime Datta Ken (That Time I Got Reincarnated as a Slime) television anime on Thursday, scheduled to open in theaters in Fall 2022. Bandai Namco Arts also opened an official website for the movie, revealing an announcement promo and a teaser visual (pictured).

Produced by 8bit, the first season aired in 24 episodes in Fall 2018, followed by the first cours of second season premiering in Winter 2021, and the second cours on July 6. The animation studio also produced the Tensura Nikki: Tensei shitara Slime Datta Ken (The Slime Diaries: That Time I Got Reincarnated as a Slime) spin-off anime that aired in Spring 2021. Crunchyroll and Funimation streamed the anime series with English subtitles. Funimation is also streaming an English dub.

The light novel launched on the Shousetsuka ni Narou website in 2013. Micro Magazine began publishing the series in May 2014, with illustrations by Mitz Vah. The 18th volume shipped on March 31.

Tensura franchise is strong after 4cours anime they announced movie, which means another TV sequel is in the works. More Tensura is fine, hoping this movie has good pacing and execution because past seasons seems lackluster

So, is this anime will get 3rd season ?

Let's see after this movie ends

Agelastus said:
I was hoping there would be another season but I'll take what I can get
There will be 100% story is far from over.

At first I thought there would be a third season, and I also have the impression that always launches a movie after two seasons of some anime.

Does anyone here feel the same way?

JanPri said:
Another sequel... Wonder why do people like it that much. Seriously.

If I'd be honest with you, I wouldn't start this series today, it doesn't feel any less generic than any other isekai, but it is addictive nonetheless. All the tropes, as repetitive as they are work here, because our slime has a noble cause, despite we knowing it will work, the travel to that point is wonderful. In the Aeneid we already know how it will end, in the first chapter they tell us that Eneas' family is meant to be what makes Rome so wonderful, everybody knows the myth already, knows that no matter what the gods won't change Eneas destiny and it has the Homeric poetry behind to show that it has been done before, and as i said it works wonderfully.

I think a lot of people avoid isekai just because of the name, isekai it's a setup. It's not a plot, neither a genre (imo). As cheap as it is to use isekai to develop the worldbuilding smoothly, for this anime it works perfectly, cause not only it helps us readers to dive into its universe easily (the setup) and gives us the escapism that makes isekai so popular (you may not like it but it is what it is, that's what the people want), but also justifies the OP-ness of the MC, and the plot itself develops this OP-ness from zero to where we are now, so you feel that Rimuru from first season wouldn't have defeated Rimuru from this last chapter. In the end Tensura is shounen, as shounen is not a genre either but the demographic it targets, teens, prepubescent boys, this, despite being appealing to lonely adults for its escapism, it's meant for youngsters. In the end is a well-done series, I won't claim it's perfect neither the best, but it's entertaining enough to captivate anybody that likes an interesting worldbuilding and fantasy.

Still a year to go but looking forward to it.

[quote=Dragevard message=64461121]
JanPri said:
Another sequel... Wonder why do people like it that much. Seriously.

Because you don't need a special hook. A well executed show is always going to work, regardless its an isekai.

There have been 48 episodes so far but they adapted only 6 light novels out of 18 (with the 19th set to release next month). There's still plenty more to cover and their pace is perfect. I can only applaud 8bit for the most thorough isekai adaptation that we have ever seen so far. Keep up the good work!

i was so hyped when i saw the “to be continued” hype!!

This franchise received multiple seasons, the movie and spin-off series faster than ReZero even confirmed a second season, lol.

Dragevard said:
JanPri said:
Another sequel... Wonder why do people like it that much. Seriously.

you're right we need more new trashy isekai rather than good isekai sequels
I just asked what makes it so popular. No reason to be like that. I've seen just the 1st season and it didn't really seem that special to me. The only thing that really stood out was the fact the protagonist who was a completely normal 40 years old guy in his previous life suddenly doesn't act, look or think like that at all after being reincarnated. Other than that it's the same OP protagonist beats everyone formula as in every other fantasy these days

So I just wanted to know what does it make it special and why do people like it that much that it got 2 24-episodes seasons, 5-episodes OVA, a spin-off and now a movie

Ah ok.
Not a fan of Movies for series. Takes a long time to get into cinema's here, if they ever. Sadly, this isnt one of the Movies I expect to get purchased for cinemas here. (The Netherlands)

I am just going to hope it wont be a canon movie. Where I have to watch it to follow the series.

JanPri said:
Another sequel... Wonder why do people like it that much. Seriously.

Now I wonder whether it will be a recap movie or volume 7 (probably but will volume 7 fit into an entire movie without cutting a lot?)
Will have to wait for more info :|