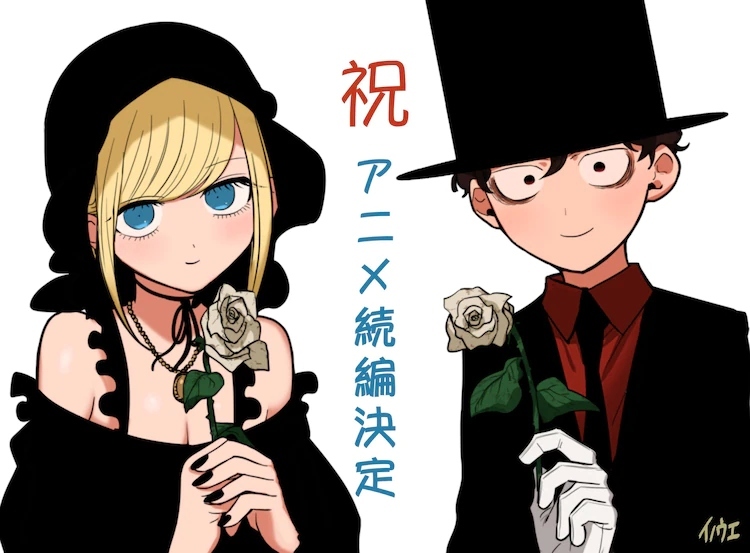 Following the broadcast of the 12th and final episode of the Shinigami Bocchan to Kuro Maid (The Duke of Death and His Maid) television anime on Sunday, an anime sequel was announced.

Produced by J.C.Staff with Shogakukan Music & Digital Entertainment (SMDE) in charge of CGI, the anime series premiered on July 4. Funimation streamed the anime with subtitles and English dub as it aired in Japan.

Koharu Inoue began serializing the romantic comedy manga in Sunday Webry web manga portal in October 2017. Shogakukan published the 13th volume on July 12. Seven Seas Entertainment licensed the manga in English on July 2 and plans to ship the first volume on May 24, 2022.

Synopsis
As the elegant, frail flower petals wither away into lifeless ashes, the young duke is tragically reminded of the despicable power forced upon him—the ability to kill anything he touches. Scorned by his family, he is sent away to live in near isolation. Fortunately, he is not entirely alone, as the manor's staff— his dutiful butler Rob and the flirtatious maid Alice—keep him company and make his life less miserable.

As the duke's romantic feelings for Alice grow, so does his continued frustration for the limits set by his unfortunate ability. Therefore, he resolves to break the curse cast upon him all those years ago, not only for his sake, but Alice's as well—for he is painfully aware of how difficult it is to avoid the touch of a loved one. [Written by MAL Rewrite]

Liked the first season even the anime is CGI. The story and the romance of the mains is strong point of this anime

Ngiya said:
RobertBobert said:
Was it that popular? I'm trying to watch the first (already the first) season and I had an awkward feeling like I'm the third wheel on someone else's date.
this is the best representation of what I felt when I was watching the anime (still enjoyed it though)

It reminded me a bit of Tsuki ga Kirei, which was rather awkward to watch due to its overly realistic portrayal of teenage romantic attraction. It was like I was spying on teenagers, which is not the best association when you are 25+.

What a surprise . I was not expecting the 1st season to be this well recieved , let alone get a sequel announcement right away . I am a big fan of the manga but i hated the anime . Skipped through the whole thing , just couldnt stand the visuals .
Nevertheless i am happy for the mangaka .
Next season really has some heartwarming and breaking moments , even more than the first season . And a shit ton of plot twists .

I dont think i can bear seeing my girl sarah be in fucking cg .

I am so happy that it will get a 2nd sequel. After seeing the story i was so happy but as well sad that it ended very early in some moement i almost cried so thank you for giving us the sequel.

RobertBobert said:
Was it that popular? I'm trying to watch the first (already the first) season and I had an awkward feeling like I'm the third wheel on someone else's date.
this is the best representation of what I felt when I was watching the anime (still enjoyed it though)

KANLen09 said:
Well @RobertBobert of course you do, we're all the 3rd wheels here.

That said, really a surprise!

I'm a bit old for romance, where both characters constantly confess their love to each other.

Well @RobertBobert of course you do, we're all the 3rd wheels here.

That said, really a surprise!

Sigmar-Unberogen said:
This show is probably the only one from this season I wanted to have a continuation, apart from the Dragon maid season 2.

Tohru will get a 3 and 4 and 5 and many more. its super popular and its done by the most beloved studio ever, KyoAni (worth it or not). No one watched bocchan cause of the cgi and its great JC Stuff supports it with a second season.

unexpected tbh but im SO happy this got a s2!! and its gonna be better at least story-wise! Cheers to JC Stuff for supporting an anime no one watched but deserves all the praise.

it was a really wholesome anime to fill my empty heart, im so sad is done but thank god season 2 was announced. Finally an anime with good cgi

Also, does anyone know in which chapter the anime ended so i can continue from the manga?

More than anything!!! I want another season

This anime made my day every monday

Don't quite know why I had expected the anime to end with the curse being broken, knowing how around many chapters the manga's currently at, so while I did hope for some more actual story here in the end, it was a good spot to leave on for now. Looking forward to the sequel, although I hope it won't quite go like High Score Girl's 2nd season being divided into 3/9 episodes.

Just finished watching the season 1 finale, and I can definitely watch more of this, so kudos to the staff for getting renewed

This anime kinda put me off during the first few eps but gradually i became fond of this anime. Great news!

This does put a smile on my face :)

While the anime dropped a tier along the course of the journey, I'm still excited to see where this will go!