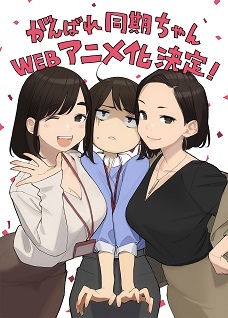 Illustrator Yomu announced a web anime adaptation of their Ganbare Douki-chan (Do Your Best, Douki-chan) doujin series on Twitter on Saturday. Yomu also posted an illustration to commemorate the announcement (pictured).

Synopsis
"In a shared room with my co-worker at the hotel?! Although I was warned not to do anything stupid, my eyes would inadvertently turn to her legs wrapped in pantyhose..."

Unbeknownst to him however, Douki-chan secretly has feelings for him. As Douki-chan struggles to confess her feelings, her rivals, both the kouhai and senpai, continue to vie for his affection.

Yomu irregularly posts the series on their Twitter account, beginning with the first illustration in September 2019. The doujin series has been collected into five volumes, with the latest shipped on Friday.

Based on Yomu's Yomu Tights doujin, Yokohama Animation Lab produced the 12-episode Miru Tights net anime that ran between May and July in 2019. A special episode was bundled with the Blu-ray release in August that year.

I'm guessing these will have short episodes as well

What else can I say? Absolutely based.

XCF_Konzarn said:
So the official twitter account was launched a few hours ago and it already has 20k followers?!
DAMN are the japanese based.
the announcement tweet got 100k likes in 2 hours

oh boy this is going to be interesting.

So the official twitter account was launched a few hours ago and it already has 20k followers?!
DAMN are the japanese based.

I looked it up and it's a pretty short read with usually 1 main illustration per "chapter" and then maybe a few lower quality ones with some dialogue to advance the story.

Got through the whole thing in like 15 minutes and it's the standard romcom where every time the main couple is about to make any progress some person randomly shows up right then to ruin the moment. Can't say I'm a fan of those but the main girl is pretty cute so it should be watchable.
Although with how little content there is it's probably gonna be a 5 minute per episode thing unless they HEAVILY expand the scenes or write completely new stuff for the anime. Regardless I'll probably watch it.

Sounds interesting. Will have to read it

I liked Miru Tights, so I'm probably going to like this.

This guy is a man of culture.

snowykevin said:
honestly remember I followed this artist on IG at one point, didn’t even realize it had a story

snowykevin said:
honestly remember I followed this artist on IG at one point, didn’t even realize it had a story
Oh it definitely packs a plot.

honestly remember I followed this artist on IG at one point, didn’t even realize it had a story

I was excited when I saw the tweet earlier. I've been thinking for quite awhile that it would be great if this got an anime like Miru Tights, especially since it has a cute story going on.

lets go what wonderful news . i cant believe it hahhahhah

hope it will be as well done as miru tights , that had some insane production qualities , for its type of show.

tho i dont know how they are going to make this into a series . Gonna have to flesh things out a bit .

I hope "web anime" does not mean it will be a poorly animated short show.


EcchiGodMamster said:
ah, i was wondering if this was gonna get animated lol

In fact, with due diligence, it has quite a lot of potential. Even as a pure eye candy show.