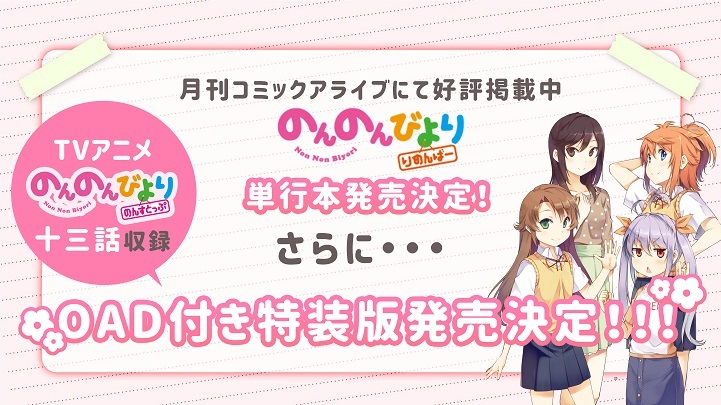 Monthly Comic Alive began serializing the slice of life comedy manga in September 2009, which ended its 11-year run on February 26. Kadokawa published the 16th and final volume on March 23.

Sentai Filmworks licensed the anime series in North America and shipped both seasons and the anime film on home video in January 2015, November 2016, and June 9, respectively. Seven Seas Entertainment licensed the manga in English in October 2014 and published the 14th volume on January 5. The 15th volume is planned for release on October 12.

God really seems to be on our side!!

More of this please!

Nothing can stop Non Non Biyori. :)


Now I kinda hope they'll do an anime original season 4, I really love this series so I was kinda sad it ended with season 3

Of happiness of course

now this does put a smile on my face

inject it in my veins.jpg

Yess. I hope Non non biyori get 1 season again. With the story continuing from season 3. Renge goes to school with Shiori

Always good to have more of it.

Great! Or at least it's better than nothing.. but it's not too long ago I finished this series and put it in my favorites.

yesssss!!!!!
Even it is only one episode, but, at least, it is better than nothing.

More of this show is never not welcome.