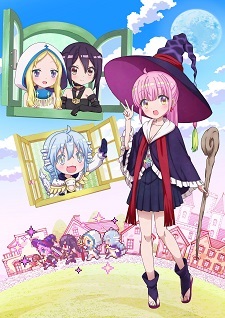 Synopsis
The story begins 15 years after the demon king was defeated and the world has become peaceful. Kotone, who graduated from school and became a magician, inquired about the kingdom-affiliated RPG Real Estate in order to find a new home. In reality, RPG Real Estate was Kotone's place of employment, and together with Fa, a demi-human, the priest Rufuria, and the soldier Rakira, they help support the searches of new homes for the customers with various circumstances. (Source: MU, edited)

I'm liking this recent trend of cute girls doing fantasy. Sing me up for more!

Most of my top cgdct shows come from Doga Kobo and 4-koma series, looking forward to this one.

Another CGDCT from Doga Kobo? Count me in.

That kind of series is Doga Kobo's speciality.

No need to say more, that's an instant PTW.

This is similar to Dragon Ie wo Kau and could pan out to be decent.

Kirara anime adaptations never miss, i can already tell this is one is gonna be good

That key visual looks kawaii! And it's Doga Kobo too that will be animating this! I surely hope this will be overflowing with cuteness! Now waiting for the announcement of the main cast.