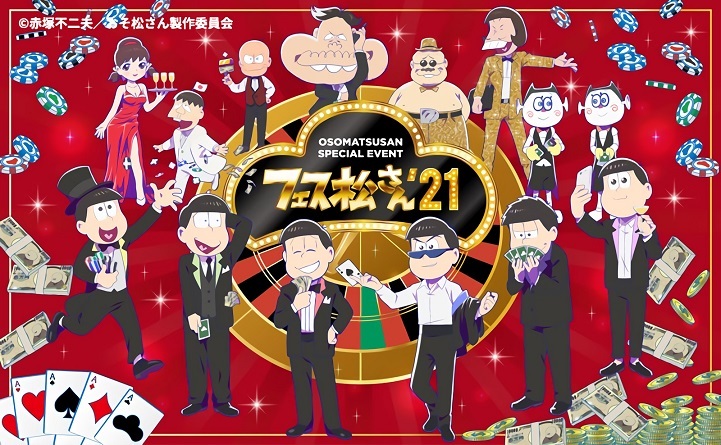 The Fes Matsu-san '21 event announced two new anime installments for the Osomatsu-san (Mr. Osomatsu) anime series on Sunday. The two new anime, commemorating the anime's sixth anniversary, will screen in theaters in Japan on a limited basis in 2022 and 2023, respectively.

Based on Fujio Akatsuka's original comedy shounen manga, Osomatsu-san commemorated the author's 80th anniversary with its first anime series in Fall 2015. A second season followed in Fall 2017, and a side story anime film opened in Japan in March 2019. The third and latest season began airing last October and ended with 25 episodes on March 30.

Synopsis
The majority of the Matsuno household consists of six identical siblings: self-centered leader Osomatsu, manly Karamatsu, voice of reason Choromatsu, cynical Ichimatsu, hyperactive Juushimatsu, and lovable Todomatsu. Despite each one of them being over the age of 20, they are incredibly lazy and have absolutely no motivation to get a job, choosing to live as NEETs instead. In the rare occurrence that they try to look for employment and are somehow able to land an interview, their unique personalities generally lead to their swift rejection.

From trying to pick up girlfriends to finding the perfect job, the daily activities of the Matsuno brothers are never dull as they go on all sorts of crazy, and often downright bizarre, adventures. Though they desperately search for a way to improve their social standing, it won't be possible if they can't survive the various challenges that come with being sextuplets! [Written by MAL Rewrite]

Seems like they still have a ton of ideas for this series. Gonna watch it anyway though.

I like Osomatsu-san quite a bit so I'll be looking forward to these. I'm hoping they'll be like 2019 movie.

Not least bit surprised but it's good to see nonetheless.

I know this is a cult series, but I never thought it would be so popular even now.

Been wanting to start the series for a while. I might as well start then hype this. Good to see this is still rolling.

I would rather have a new season but this is also good news.