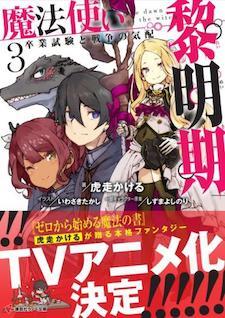 Kakeru Kobashiri revealed via Twitter on Wednesday that her Mahoutsukai Reimeiki (The Dawn of the Witch) light novel series will receive a television anime adaptation.

Synopsis
The war that raged between the Church and the Witches for five centuries finally ended in peace but a few short years ago. However, nestled in the shadowy places of the world, the embers of that age old conflict still smolder.

Attending the Royal Academy of Magic of the Kingdom of Wenias is a struggling student named Sable, who has no memories of his time before being enrolled. At the command of Headmaster Albus, he left the Kingdom to travel to the southern reaches of the continent, where anti-magic insurgents are still a force to be reckoned with, as part of a special training regimen. Accompanying him are a party of individuals strong in both ability and personality; there's the one known as the Witch of the Dawn, Roux Cristasse, who seeks the forbidden knowledge of primeval magic in the 'Grimoire of Zero,' the genius girl Holtz, as well as the school's sole beast, Kudd.

Just what truth shall they uncover in their journey to the south...? (Source: MU)

Kodansha published the first volume of the fantasy light novel with illustrations by Takashi Iwasaki (Zero kara Hajimeru Mahou no Sho manga) under its Ranobe Bunko imprint in August 2018. The second volume was published in March 2019. After a two-year hiatus, Kobashiri revealed that a third volume will be released on April 30.

Kobashiri began serializing a manga adaptation with illustrations by Tatsuwo (Macross Δ manga) in Monthly Shounen Sirius in July 2019. The third compiled volume was released on March 9. Kodansha USA began publishing the manga digitally in English on March 23 and released the second volume on Tuesday.

Piromysl said:
Apparently, this is a sequel/spinoff of Grimoire of Zero, which aired in 2017.
Underrated little series. It's nice to see it getting more love.
No wonder those character designs look so similar.

Alright, shall give this one a go when it comes out, Grimoire of Zero is a show that no one talks about anymore.

Piromysl said:
Apparently, this is a sequel/spinoff of Grimoire of Zero, which aired in 2017.
Underrated little series. It's nice to see it getting more love.

Yeah I think this look like the sequel to Grimoire of Zero.

Another male lead that looks like so generic. Nice. Ill try this one out.

I hope the show isn't as gloomy as mc eyes.

looks okay, will look it up

I can understand why almost all male leads in LN look like everydude, but why do many of them look so much like Kirito in appearance? Is his image the iconic?

Apparently, this is a sequel/spinoff of Grimoire of Zero, which aired in 2017.
Underrated little series. It's nice to see it getting more love.