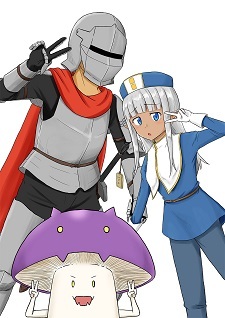 Synopsis
A fantasy and adventure comedy starring Karla, a dark elf cleric who invested too much in her insulting skills, and Alvin, a swordsman who has to put up with her antics. (Source: Kadokawa, translated)

Nice, this one is cute

Chika_tetsu said:
too bad dark elves are not my taste

Chika_tetsu said:
too bad dark elves are not my taste
You watch normal anime to beat your meat or what that it matters in the first place?

as once men and women once said, OH HAPPY DAY!
love this manga to bits, Healer is OP.

Am I wrong, or is it that manga with a fantasy version of modern day-to-day Japanese life?

This series is some funny stuff. Glad its getting a adaptation but it will probably be shorts. Still very funny and will check the adaptation out for sure.

This sounds really funny, hope it turns out well

too bad dark elves are not my taste

I don't know anything about this but it's looks interesting.

Gives me Maou-jou Oyasumi vibes. I'd it will be just as good, I'm sold.

I've read couple of chapters few months ago and I still remember the feeling of mind going numb from repetitiveness. It's like hearing the same joke every hour without the ability to slap the culprit across the face.

Had a bit of a 'nam flashback at the word Healer but thankfully it seems to be going the opposite direction.

Could be interesting, I'll note it down and wait for a PV.

the most sassy female character on manga is here.

I remember reading the first 10 chapters or so of this series a while back and finding it pretty funny, if a little repetitive (I only stopped cos the scanlation seemed to end up getting stuck in purgatory for months on end and I couldn't be bothered to keep waiting for it).

Ahh... My spidey sense is tingling!

Dragevard said:
snowykevin said:
dark skinned elf mmm, jokes aside I wonder what studio is behind this though; for some reason I get Doga Kobo vibes from her character design

yes I know that, I was saying the mangaka’s character design would pair well with Doga Kobo; perhaps I could’ve worded that better so that’s my fault

bruh, all the manga I'm reading are getting anime adaptations, let's goooo

snowykevin said:
dark skinned elf mmm, jokes aside I wonder what studio is behind this though; for some reason I get Doga Kobo vibes from her character design