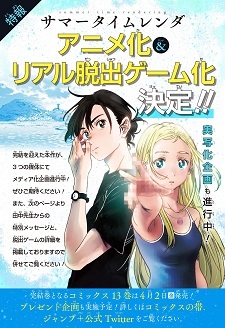 Synopsis
After his parents died, Shinpei Ajiro lived with the Kofune sisters, Mio and Ushio, but he has since moved to live on his own in Tokyo. But after Ushio drowns while trying to save the young Shiori Kobayakawa, he returns home to mourn her departure. However, bruises around Ushio's neck bring her cause of death into question.

Taking a step back, Shinpei becomes convinced there must be another explanation. Dangerous entities roam among the islanders, and a vision of deceased Ushio asks him to "save Mio" as her final request. He is certain that something is afoot—and Ushio's death is only a piece of the puzzle.

With the help of Mio and various others, Shinpei struggles to forge a future in which he, his friends, and family can stay alive. But the more he investigates, the more impossible such a future seems. This darkness infiltrates his home island. Just how much more suffering will he go through before finding the right path to save it all? [Written by MAL Rewrite]

Based on his 2008 one-shot Jamais Vu, Tanaka began serializing the supernatural mystery manga in Shounen Jump+ web magazine in October 2017. Shueisha published the 12th volume on November 4, and will release the 13th and final volume on April 2. The company's Manga Plus platform began simulpublishing the manga in English in January 2019.

aight just come back after checking the manga, supposed to read only a few earlier chapters yet I ended up binge the whole series. it would be more exciting in animated form

Any particular reason why her hand pixelated?

Aikotoba said:
Sounds interesting enough for me to check the manga out.
Itz_moneyez said:
Good news but my interest in the manga kinda wavered at one point.
Mind sharing a bit about what made you wavered? (with a spoiler tag or DM me) Did something unsatisfying happened? O.O
Nothing to do with the story or anything. I kinda just put it on the shelf and maybe i might comeback to it.

I just started reading the manga and it's been pretty interesting. Definitely looking forward to checking the anime out!

This manga was popular next to Jigokuraku. I'll check it out.

Great news! Now I have a good reason to finish the last 20-30 chapters of the manga. Anime should be good.

A mix of re:zero and bokumachi. Main character is not a wuss, and story have some dark themes and a little bit of nudity, which probably would be censored. I read some of chapters sporadically, but i doubt whatever studio, which do adaptation, will adapt all the chapters fully, especially since manga is finished and probably not really popular that much.

Sounds interesting enough for me to check the manga out.
Itz_moneyez said:
Good news but my interest in the manga kinda wavered at one point.
Mind sharing a bit about what made you wavered? (with a spoiler tag or DM me) Did something unsatisfying happened? O.O

Oh wow, the synopsis looks great. Definitely going to check this one out.

Really glad this got an anime. With the manga now complete, we might get a whole manga adaptation.

Good news but my interest in the manga kinda wavered at one point.

Live Action Project sound not bad for this manga , but You dont have high expection to be good