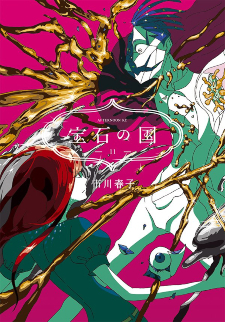 The February 2021 issue of the Afternoon magazine announced on Friday that Haruko Ichikawa's Houseki no Kuni (Land of the Lustrous) manga is entering an indefinite hiatus.

Synopsis
Long ago, Earth was struck by six meteorites, creating six moons and leaving a lone island in their wake. Those who could not make it to the island sank to the bottom of the ocean, where, over time, they slowly turned to crystal. As countless millennia passed, 28 of these crystallized lifeforms, known as the Lustrous, rose from the depths and resided on the island. Led by the wise Kongou-sensei, they must defend themselves against the seemingly infinite number of Lunarians, inhabitants of the moons who seek to harvest their valuable bodies for crafting weapons and jewelry.

Houseki no Kuni centers around Phosphophyllite, a young gem about to turn three hundred years old. Clumsy, extremely fragile, and having no visible talent, they are one of the weakest gems around, unable to help in the fight against the Lunarians in any meaningful way. But as the battle with the otherworldly invaders rages on, they soon learn that power comes at a cost that no one should have to pay. [Written by MAL Rewrite]

A 12-episode television anime adaptation by animation studio Orange aired in Fall 2017. Sentai Filmworks licensed the anime series in North America and released it on home video with both English subtitles and dub last May.

Houseki no Kuni placed tenth in the male readers' division in the 2014 Kono Manga ga Sugoi! rankings, and was nominated for the 8th Manga Taisho Awards.

Started this series as soon as the hiatus was announced, and am so glad I did. HnK is fantastic in every way. I hope it comes out of hiatus soon!

Well, the waiting for the readers would look like

Ahhhh well I guess its for the better so the author doesnt get exhausted. I need to find other mangas to read now

This hiatus is a relief for me, hope Ichikawa can rest her mind after these painful journey

Mattinator95 said:
cinnacate_ said:
It's making me sad, but I'm really hoping Haruko Ichikawa is fine, and healthy, like, please take care of yourself

Yeah, I've seen, I'm happy for her if that's the case~ I've been wondering though, is there a way we could see what she's up to and such? In times such as these I really want her to be okay : <

I was excited, I thought season 2 was announced.

cinnacate_ said:
It's making me sad, but I'm really hoping Haruko Ichikawa is fine, and healthy, like, please take care of yourself

It makes me sad that this has to happen, though I hope there is some light in the future for Houseki no Kuni. Been one of my favourite mangas to read so far and has really grown onto me.

It's making me sad, but I'm really hoping Haruko Ichikawa is fine, and healthy, like, please take care of yourself

See. this is why I'm slightly hesitant to read manga. I know that if I like, there is a chance that news like this will happen.

Maybe now's the time to work on that 2nd anime season.

I mean... After what happened in tha recent chapter, its understandable that author might need some time to create the set up for the next arc, maybe there's other reasons though

Xaeveax said:
It's the week of cancellations and hiatus apparently. Was waiting hopefully for a season 2, but that's pretty unlikely now.

Amen. Its like all the publishers got together and decided 2020 needed more oomph before it went out.

Houseki no Kuni truly is the embodiement of suffering

For Phos and for us readers/watchers

"Why we still here, just to suffer?"

It's the week of cancellations and hiatus apparently. Was waiting hopefully for a season 2, but that's pretty unlikely now.

What was the reason

read about it earlier, nothing to do but wait

See ya all in next century.