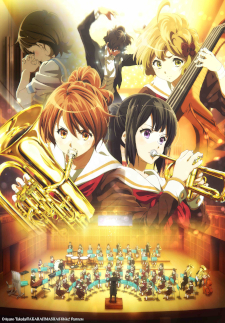 Kumiko Oumae could never forget the angry tears of Reina Kosaka who uttered those words at the concert band competition in her third year of middle school.

Now in high school, Kumiko is invited by Hazuki Katou and Sapphire Kawashima to join the concert band, but their performances are sorely lacking... Everything changes when a new music teacher, Noboru Taki, takes over. At first, the band members resist his disciplined approach, but gradually gain confidence as their playing improves. Kumiko also feels herself growing closer to Reina. Taki holds an audition to select the members to perform in the Sunrise Festival Competition...

Synopsis (Hibike! Euphonium Movie 2: Todoketai Melody)
Autumn is in the air as the Kitauji High School concert band prepares for the National Competition. The band hears troubling news that Asuka Tanaka, vice president of the club and one of the key euphonium players in the band, may quit! Asuka is beautiful and charismatic and everyone relies on her, but she also has a cool side and never reveals her true self. Kumiko doesn't get along with Asuka initially, but her feelings change when she learns that Asuka may actually drop out. Asuka has feelings about the euphonium that she cannot tell anyone else... (Source: Eleven Arts) 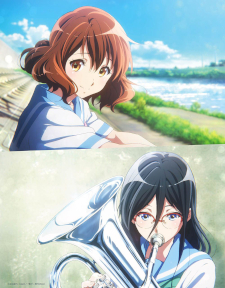 The anime series is based on Ayano Takeda's Hibike! Euphonium light novels. Takeda published the ten-volume series between December 2013 and June 2019.

Kyoto Animation adapted the novels into a television anime spanning two 13-episode seasons. The first season aired in Spring 2015, followed by the second in Fall 2016. The recap films premiered in April 2016 and September 2017, respectively.

A film spin-off of the second season written and helmed by series production director Naoko Yamada (K-On!, Koe no Katachi)—Liz to Aoi Tori—premiered in April 2018.

Better late than never, I suppose. Congrats to NA fans!