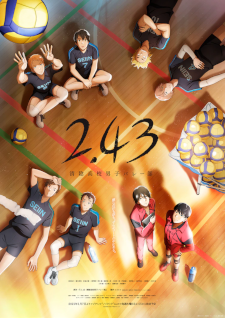 yama, a solo artist and member of the group BIN, is performing the opening theme "Mahi."

Yasuhiro Kimura (JoJo no Kimyou na Bouken Part 5: Ougon no Kaze) is directing the anime at David Production, and Yousuke Kuroda (Boku no Hero Academia) is credited with series composition. The main cast and staff were announced in June.

2.43: Seiin Koukou Danshi Volley-bu is adapted from Yukako Kabei's novel series, the first volume of which was published by Shueisha in July 2013. It was later released in two volumes under the Shueisha Bunko imprint in March and April of 2015.

Fitting that Kageyama's VA is in another anime about volleyball lol.

This is not Stone Ocean...

looking forward to this one, it looks decent