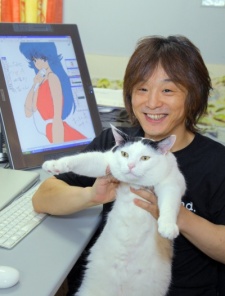 On Tuesday, Wave Studio announced on Izumi Matsumoto's blog that the mangaka passed away on October 6. He was 61 years old.

Matsumoto suffered from cerebrospinal fluid disease, stemming from a car accident when he was three years old. The disease forced him to stop working due to heavy headache, neck, and back pain. He suffered from general malaise due to the disease over the last few years. However, Matsumoto desired to return to work and continued to fight the illness, but was also worried due to a heart surgery he had several years ago. Last November, Matsumoto revealed on his blog that he had spinal stenosis. Matsumoto passed away in his sleep without suffering, according to his doctor.

Matsumoto is well known for creating the romantic comedy manga Kimagure Orange☆Road, which he serialized from March 1984 to September 1987 in Weekly Shounen Jump. Digital Manga Publishing released the manga in English digitally in 20 volumes between April 4 to November 26 in 2014. The publisher launched a kickstarter campaign in April 2016 to physically publish the series, and successfully reached its goal the following month.

Studio Pierrot adapted the manga into a 48-episode television anime that aired from April 1987 to March 1988, followed by two sequel films in 1988 and 1996. The manga also received an eight-episode original video anime, which was released between March 1989 and April 1991.

Rest in Peace Matsumoto-sensei. Thank you for everything you give the people.

What terrible news.
Every time someone like him dies, the whole world of anime/manga loses a star.
R.i.p. Sensei

I'm stunned by this news. My condolences to the family and friends.

Rest in peace. I watched the anime earlier this year. I enjoyed his work. Madoka

He was still young, it´s really sad. I still haven´t read KOR, but I always found the art pretty. Rest in peace.

Wow, after all the pain he went through... at least his passing was painless.

This is heartbreaking. I'm am glad however that he had a painless death. Such a tragic life. I haven't read his work but this news hit me hard.

R.I.P Matsumoto. I haven't read your works, but I know how influential it is, thank you for being you.

Sad to see him go, rest in peace.

RIP, Kimagure Orange☆Road is probably one of the first anime I've ever heard of and yet have never been able to get to.