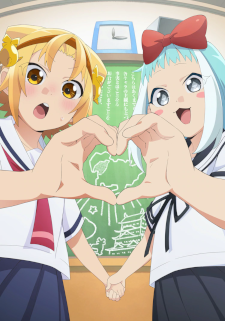 Synopsis
After growing up in Tokyo, high school student Jin Kaito moves to Nagoya where he meets Yatogame Monaka, a fellow student who puts her Nagoya dialect on full display. With her cat-like appearance and unvarnished Nagoya dialect, Yatogame won't open up to him at all. This popular local comedy is increasing the status of Nagoya through observation of the adorable Yatogame-chan! (Source: Crunchyroll)

The cast from the first two seasons will reprise their roles, led by Haruka Tomatsu (Darling in the FranXX) as Monaka Yatogame and Mitsuhiro Ichiki (Bernard-jou Iwaku.) as Kaito Jin. Honoka Kuroki (Blue: Line Step Brush) and Ayasa Itou (BanG Dream!) are joining the cast as Shiharu Itemae and Nanaho Koshiyasu, respectively.

Masaki Andou's Yatogame-chan Kansatsu Nikki 4-koma manga is focused on Aichi Prefecture, in particular its capital, Nagoya. Andou originally uploaded the manga to his personal Twitter account. It was first serialized in the July 2016 issue of monthly Comic REX, where it continues to be published. REX Comics released the eighth compiled volume on March 27 of this year, and will ship the ninth volume on October 27.

The first anime season produced by Saetta and Creators in Pack aired in Spring 2019. It consisted of twelve 3-minute episodes, a format that continued for the second season in Winter 2020. The seventh and eighth volumes of the manga bundled the first and second season—respectively—of the anime on Blu-ray.

So this little short anime is popular, huh?

I need to watch the second season.

can't get enough of nagoya-ben

Everything is getting a second season at this point

This is probably the first time I've heard of this anime. I need to check previous seasons first.

Yo I'm serious God Of Highschool and Peter Grill better get a season 2 announcement.

Damn, the amount of sequels we are getting for 2021 is just too much at this point.