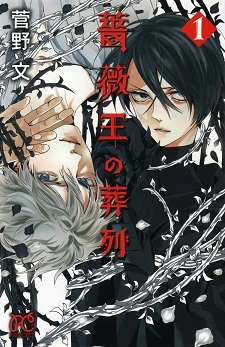 Synopsis
The crown of England has been hotly contested throughout history, and in the Middle Ages, a series of great civil wars became known as the War of the Roses. Claiming a right to the throne, the Duke of York seeks to unseat King Henry VI and his heir in order to become king himself.

On a dark day filled with many ill omens, the Duke gains a son: Richard Plantagenet, third of his name. Neither male nor female, but instead possessing characteristics of both sexes, Richard III is immediately reviled by his mother. Her hatred defines his childhood, leading to a deep disgust toward his own body and an adverse reaction to being called a demon.

Richard grows up troubled by visions of England's former foe, Joan of Arc, who taunts that he will bring ruin to all who know him. He believes that he can attain salvation by helping his father achieve his destiny of becoming the king. However, cursed by the expectations of both his mother and Joan, will Richard's actions instead drag his family down into darkness? [Written by MAL Rewrite]

VIZ Media licensed the manga in English in February 2015 and published the 12th volume on June 9. The 13th volume is set for a November 10 release. The manga has also been published in multiple foreign languages, including Chinese, Italian, Polish, French, and Spanish.

For all of you guys, yes it's not a yaoi, and it's not a harem BUT it is pretty fckn gay xd I love the manga so they better not mess this up

We rarely see intersex characters in anime and the synopsis sounds interesting definitely going to watch it.

After my experience with Afterschool Nightmare and reading the comments from trans people in their reviews for this manga, I'm hesitant to give it a try but...I will anyway lol.

As always, homophobes have descended in the comments section. These people will keep hating on a show and writing "I thought it was interesting till I realised it was yaoi/queerbait uwu" comments even when the show will be airing

Anyhow, this looks this has potential. PTW

Look like an interesting historical drama and apparently has an intersex protag. I'll check it out :)

I love the manga. I hope the adaptation will be good.

Boazanian said:
Never heard of this until now, and it sounded so interesting 'cause alternative history is cool - until I saw the manga panels... Would've put on the PTW if it wasn't just another yaoi anime.
Good thing it's a shoujo then?

It literaly says "historical dark fantasy" and that the main character is intersex. And I still see comments like "just another yaoi".

Something like that could be said 10+ years ago, but be real people, we're not in that era anymore.

The gay panic is as I expected. Delicious.

I voted for this! Love me another beautiful Richard and Henry is so gorgeous. I've been anticipating the anime announcement of this dark shoujo series for so long. I hope drama CD cast returns and anime does manga art justice.

The description actually reminds me of Vinland Saga, it also sounds like a pretty dark story

The artwork gives me those vibes as well, yes as people have mentioned it supposedly looks more yaoi esc, but I don't know it looks more like it's just from a magazine primarily aimed at girls/women/me

Boazanian said:
Never heard of this until now, and it sounded so interesting 'cause alternative history is cool - until I saw the manga panels... Would've put on the PTW if it wasn't just another yaoi anime.

From what I hear online, this actually a lot more than just another yaoi anime

Read in a review that the whole premise is spoiled due to it being an excuse for indirectly being a yaoi story. I can see myself thinking along the same lines already so it's probably not for me.
Since an intersex person can identify as male and be attracted to the same sex, i'm reluctant to call it an excuse.. In any case, I'd probably have to watch it first before i could pidgeon-hole it into anything..

Looks interesting. I might get the first volume to see if it’s my thing.

Lmaooo typical of people to judge something as "yaoi" solely based on the manga cover and design, that's so dumb.
Yes, there's some things going on between the MC and a guy, but does it really even count as two guys when the MC is intersex? It's not even the main part of the story and they don't even get together. Dunno much about intersex/transgender stuff though tbh, so it'll be interesting to see people's opinions on how the manga portrays that topic.

Anyways, wow I never expected this would ever get an anime adaptation, I'm
surprised and have mixed feelings about it. It's pretty dark. I haven't read it in years so I'm not caught up, but it's definitely a lot more brutal and not the stupid "bishie" label that people make it out to be. In my case anyways, I'm reading it only cause of the story and one character
best girl Anne, although I heard she doesn't appear in the later chapters anymore...
since I don't even like the art.

RiseUp_SS-kun said:
I think I will skip this, the character designs gives me gay vibes. Art is good but gay is not good for my eyes and brain.
that's pretty fucking hilarious coming form you who has a stupidly hideous signature that reads:

EVERYTHING GOES IN FICTION
STOP CENSORSHIP IN MEDIA

There's another one, though it's not the main! (listed under spoiler)


There's actually an intersex character in Astra Lost in Space that's done pretty well! The whole theme of that show really reminds me of how a lot of queer people choose their own families, too.

interesting! it's been added to my ptw!

Never heard of this until now, and it sounded so interesting 'cause alternative history is cool - until I saw the manga panels... Would've put on the PTW if it wasn't just another yaoi anime.