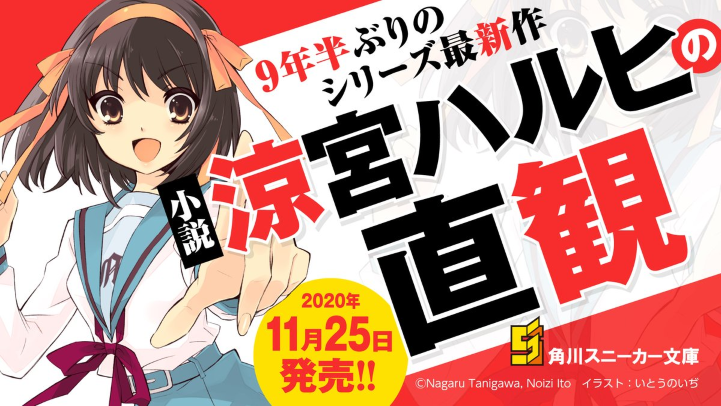 Kadokawa opened an official Twitter account for the Haruhi Suzumiya light novel series on Monday, announcing that after a nine and a half year hiatus, author Nagaru Tanigawa and illustrator Noizi Itou's original franchise will receive a new installment on November 25. The new novel, titled Suzumiya Haruhi no Chokkan (The Intuition of Haruhi Suzumiya), will be available to pre-order on September 1. 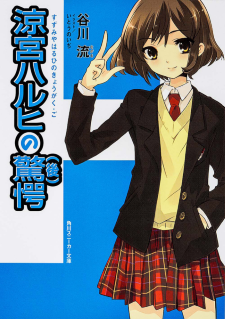 Consisting of three separate stories including one original new entry into the Haruhi Suzumiya franchise, the novel will be more than 250 pages long. The titles featured include the short story Atezuppo Numbers (Random Numbers) released in Itou's Haruhi Hyakka art book in 2013, Nanafushigi Overtime (Seven Wonders Overtime), which was published in Kadokawa's 30th anniversary The Sneaker Legend magazine in 2018, and the new story Tsuruya-san no Chousen (Tsuruya's Challenge).

Synopsis (Tsuruya's Challenge)
An email is sent to the SOS Brigade's direct address, which is rarely used. The sender was Mr. Tsuruya who is currently away from school while traveling. Attached to the email saying, "I'm asking you to answer, I'll ask everyone to give me the answer." It was a challenge from Mr. Tsuruya to the SOS Brigade.

Tanigawa and Itou began serializing the light novel series in The Sneaker in 2003. The 11th and latest volume Suzumiya Haruhi no Kyougaku (The Surprise of Haruhi Suzumiya) was published in May 2011 (pictured right). The series has a cumulative 20 million copies of its volumes in print. Yen Press published the novel in English and shipped the tenth volume in November 2013.

Kyoto Animation produced a television anime adaptation in April 2006, airing out of chronological order. The anime was rebroadcast linearly in 2009 with the second season. The Suzumiya Haruhi no Shoushitsu (The Disappearance of Haruhi Suzumiya) anime film adapting the fourth volume premiered in February 2010.

Gaku Tsugano serialized a manga adaptation in Kadokawa's Shounen Ace magazine from September 2005 to September 2013. Yen Press published the manga in English between October 2008 and November 2014.

I personally really enjoyed this series. It really stands out for it's ideas even today compared to a lot of trashy Rom-Com Sols these days. This show really was ahead of its time. How long can I expect for this to be adapted. I sure that considering the success of the latest anime installment The Disappearance of Haruhi they would like to do ASAP.

It's just a new short story volume, so the plot won't move forward.
Most of the content of that volume will be shoprt stories already available in other format as well so they're only news in book format.

malvarez1 said:
Talk about a blast from the past. But then again, what isn't being revived nowadays.
Technically, it's not " revived", the story was interupted in the middle and put in hiatus coz the author was doing something else.

The main reason modern anime is so crappy is making a comeback. Noyce !

Talk about a blast from the past. But then again, what isn't being revived nowadays.

Oh this is so nice !

I'm hoping for an anime reboot first over a sequel so that we can get a fuller adaption from the novels and have more content later when the anime reaches this latest upcoming new story.

If anyone is interested, you can discuss and/or vote, here:
「Haruhi Suzumiya Series Anime Reboot or Sequel?」thread

Whew finally more from this series.

Nice! I'll admit I was a little disappointed to hear it's a compilation with two previously-published stories, BUT STILL. (Random Numbers was kinda cute tho.)

If this is what it takes to push Haruhi back into the spotlight, then I'm pretty happy with the news. Hell, I'm even more excited for the novels getting reprinted in English. The prices on some of the physical editions are just absurd. I'm hoping they use Noizi Ito's art for the paperback covers this time around.

I can read it, if I only watch the anime?

This makes me feel so nostalgic. Haruhi is one of the many few shows that got me into anime when I was a kid. Very excited that we are finally getting more.

Hopefully there won't be a quality drop. He had literal decades to prepare after all.

Well then, this is something although not interested in the slightest.

Really glad to hear Yen Press is reprinting all volumes as a result.

Holy shit what? Also that title reads like this will come out in 2029.

Our time has come

I think it's time to get started reading this series. Don't wanna miss the hype train.

What a welcome surprise, We may finally get a proper ending to this series