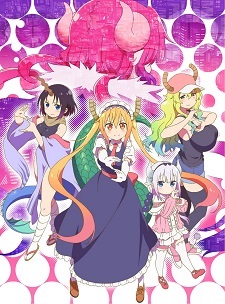 The anime series adapts Cool-kyou Shinja's slice of life comedy manga, which began serialization in Monthly Action's inaugural issue in May 2013. Futabasha published the tenth volume on Tuesday. Kobayashi-san Chi no Maid Dragon has a cumulative 2.1 million copies of its compiled volumes in circulation.

Kyoto Animation produced the 13-episode television anime in Winter 2017. The seventh and final home video volume included an unaired episode in September 2017. Crunchyroll simulcast the anime with subtitles, while Funimation streamed an English dub. The latter also released the anime series on home video in April 2018.

Absolutely loved the first season, gonna be looking forward to this so much

I need to hurry to watch the first season yet.

KyoAni ♥
I thought it may had been canceled because of the director's passing away... I'm so happy they're not giving up. It must be really hard, and I hope the staff is okay. But it's happy news <3

It sucks we gotta wait because of covid 19

Tbh even tho i love maid dragon s1, i'm not that interested with s2, as in the manga maid dragon become too serious n more focus on politic n conflict between human n dragon, instead of just the usual slice of life comedy

Rather than maid dragon s2 i'd rather have them make the Kanna-chan's daily life spin off to get the anime adaptation instead https://myanimelist.net/manga/102811/Kobayashi-san_Chi_no_Maid_Dragon__Kanna_no_Nichijou

Let's goooo! My favorite anime coming back while also being made by my favorite studio making their grand return. So excited.

Aaahhhhh I’m actually crying my first KyoAni anime, the anime getting me into the medium, my favorite anime of all time, is getting a sequel ! This is the best news of 2020, after Act-Age cancellation I couldn’t dream of better. Kyoto Animation is back to claim their throne, hope they’ll do their best with a lot of the staff resting in peace.

It's good I guess, kyoani is still here.

Oyeah!! This is definitely one of anime that I will watch in 2021. Thank you KyoAni for producing this anime again. XD

so glad that KyoAni still going strong.
Now I need to survive 2020

I enjoyed watching Season 1 last year, so I can't wait to see what KyoAni does with Season 2.

Yay!!! So glad this is happening 🥰

Can't wait for season 2 of Kobayashi

Time to watch the first season.

2021 is going to be absolutely stacked with anime to watch.

I am interested to see what they adapt from the manga.