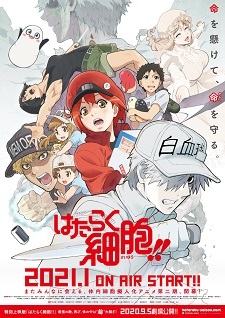 A theatrical episode titled Tokubetsu Jouei-ban "Hataraku Saibou!!" Saikyou no Teki, Futatabi. Karada no Naka wa "Chou" Oosawagi! will screen in Japanese theaters ahead of its television broadcast in the second season on September 5. The episode will be based on a story from the fifth manga volume.

Norihito Ishii (Penguin Highway) is taking over Nakajima Yutaka as the CG director. Tomoyasu Hosoi (Satsuriku no Tenshi assistant art director) is the new art director. Rest of the production staff and cast will reprise their roles.

Hataraku Saibou adapts Akane Shimizu's comedy manga of the same title, which has been serialized in Shounen Sirius magazine since January 2015. Kodansha published the fifth and latest volume in August 2017.

The first anime season aired in 13 episodes in Summer 2018. The television series was followed by a special episode that aired on December 27 that year.

Kodansha Comics licensed the manga in English in March 2016 and released the fifth volume in November 2017.

Note: This video is region-locked; click here for an alternate link.

Note: This video is region-locked; click here for an alternate link.

and when the world needed him most, he disappeared

but the manga is still dead, what do they will adapt?

Still a bit away, but nonetheless happy to see one of my favorites from 2018 return.

I hope david production make jojo part 6 before this

I hope they'll do the same for hataraku saibou black

Guess it's a great time to watch the first season.

Yup, hurray for more anime Biology lessons! Looks like we’ll be seeing a whole bunch of more bodily functions and whatnot, judging from the PV, so kind of hyped for that!

A little surprising with the Director change but here’s to hoping that won’t affect too much. January 2021 is quite the wait though, I must say. Fire Force and Jojo Part 6 seems to be taking quite a bit of Liberty but nothing wrong with that really.