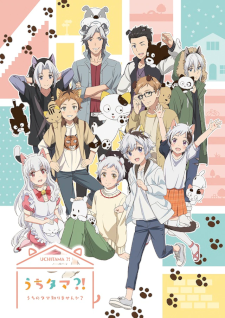 The official website for Uchi Tama?! Uchi no Tama Shirimasen ka? revealed on Thursday the cast, a new promo, and broadcast details. The anime is set to air on January 9, 2020 at 12:55 a.m. on Iwate Menkoi, Cherry Television, and Saga TV.

Fuji TV's noitamina block will also air the series on Thursdays at the same time, but will have its premiere delayed to 1:10 a.m. for the first episode. Other broadcasting channels will air it later that morning. A special screening and cast talk show will take place on January 5, 2020 at Shinjuku Wald 9 in Tokyo from 6:40 to 7:40 p.m.

Tama Okamoto (Souma Saitou) will perform the ending theme for the first episode, titled "Search for Hidamari." This ending theme will change with various cast members performing each week.

Uchi Tama?! Uchi no Tama Shirimasen ka? will be directed by Kiyoshi Matsuda (Kakegurui XX). Atsushi Morikawa (Cowboy Bebop, Kannagi) is the art director, and Tom-H@ck is composing the music. Studios MAPPA and Lapin Track will handle the animation.

The Tama and Friends characters were created by Sony Creative Products in 1983, which was followed by various anime adaptations, including 3 Choume no Tama: Uchi no Tama Shirimasen ka?, which ran from 1988 to 1994.

I see shota, my pp hard. Looking forward to the anime, but mhh still no plot summary?