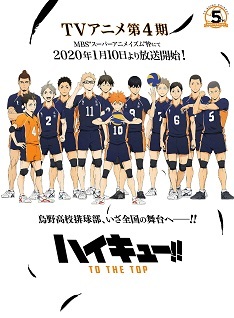 The official website of the fourth Haikyuu!! anime season, Haikyuu!!: To the Top, revealed a teaser promotional video and broadcast details on Friday. The anime will begin airing on January 11 at 1:25 a.m. on MBS and TBS' Super Animeism programming block. The second cours will then follow in July 2020.

Haikyuu!!: Riku vs. Kuu (Haikyuu!!: Land vs Sky), a two-episode original video anime covering chapters from volumes 22 and 23, will premiere at Jump Festa 2020, which runs on December 21 and 22. TOHO animation will release the original video anime on home video on January 22, 2020. A pre-screening event will be held at Osaka, Sendai, and Tokyo on Saturday.

I'm so happy i will cry ;) I was waiting for this like crazy and now i can enjoy the new season of Haikyuu for more longer time :D

Lets see how this manga turn to animes without "SLAM DUNK" idea. SLAM DUNK stop after 2 match in interhigh. And it'll begin the author original idea.

Stoorainclaire said:
then just call it Season 4 and 5! ffs

I'm really happy about this! It means i'll get to enjoy new episodes of haikyuu in both winter and summer!! 2020 is gonna be awesome

then just call it Season 4 and 5! ffs

I really don't mind but I'm so excited!

Now every anime is following Gintama's rule to rule the Top Anime page of MAL. LMAO!

But Kagura approves Haikyuu so it's all good. :)

I really like the split cours approach, hypekyuu about to be fire.

Awesome PV and absolutely stoked for this! Jan. 10, here we come!

I don’t mind this split-cour route one bit as it (almost fully) guarantees top-notch animation throughout! Pleased to see many of the cast members on course to reprising their roles too, I’m looking forward to more awesomeness from this series!

Looks like we’ll be tackling a bit of drama first up this time around.

BURNOUT SYNDROMES with another ripper by the way! I didn’t expect anything less than this. I hope to see PV 2 featuring the ED theme soon!

Great news! Hopefully that keeps the production quality high. Also great to know that it will be more than 10-13 episodes!