'Mahouka Koukou no Rettousei' Gets Second Season in 2020 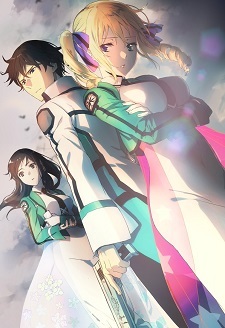 A second anime season of Tsutomu Satou's Mahouka Koukou no Rettousei (The Irregular at Magic High School) light novel series was announced at the Dengeki Bunko Aki no Namahousou Festival event on Sunday. The new season, titled Mahouka Koukou no Rettousei: Raihousha-hen (The Irregular at Magic High School: Visitor Arc), will adapt volumes nine through eleven, and debut in 2020.

Synopsis
Shiba Miyuki's classmate Kitayama Shizuku is on her way to study abroad. For magicians, this is normally impossible, since allowing the genes of someone who can use magic outside their home country's borders is tantamount to giving up national secrets. But it's allowed to happen in one case-exchange programs. And that's how Angelina Kudou Shields has arrived in Japan from the USNA to study at First High.

Around the time Lina arrived in Japan magicians began getting attacked by a mysterious being who leaves his victims drained of blood. Will Tatsuya be able to discover the identity of the 'Vampire?' (Source: Mahouka Wikia, edited)

Satou originally launched the sci-fi action novel on the Shousetsuka ni Narou website in 2008. Dengeki Bunko began printing the novel with illustrations by Kana Ishida (Shounen Maid, Wakaba*Girl) in July 2011. Kadokawa will publish the 30th volume on October 10. Mahouka Koukou no Rettousei has a cumulative 10 million copies of its volumes in circulation.

A manga adaptation of the Reihousha-hen (Visitors Arc) by Majiko! began in GFantasy magazine in December 2015 and concluded on June 18. Square Enix published the seventh and final volume on September 10.

Madhouse adapted the novel into a 26-episode television anime in Spring 2014, covering the first seven volumes. The Mahouka Koukou no Rettousei: Hoshi wo Yobu Shoujo anime film, produced by 8bit, opened in Japan in June 2017.

Aniplex of America licensed the anime series in North America and released it on three Blu-ray volumes in 2015. The company also screened the Hoshi wo Yobu Shoujo anime film in the United States theaters in July 2017 and released it on Blu-ray in July 2018. Yen Press licensed the light novel in English in 2015 and published the 12th volume on July 9. The 13th volume will ship on October 15.

The average anime aren't going to make it in 2020 cause one of the best is returning.

One of my favourite anime without doubt

oh hell yeah. i guess that i dont have to go and read the novel now lol

At last! After waiting for years, the second season of Mahouka Koukou no Rettousei is almost here! Can't wait to have you back, god shiba!

Once again Madhouse can't seem to make a second season after a successful fist season. And once again another studio has to take control of it. This is why I never have high hopes for Madhouse anime.

I was expecting 8bit taking helm of the anime series after they took charge of the production of the film. And besides, Manabu Ono is working on SAO S3 which makes even more sense to have someone else be in charge of the adaptation (I don't think Manabu Ono is bad, but just that he doesn't work that well as a director aside from few notable works that he directed).

In all fairness, even if Madhouse was in charged chances are they'd probably wouldn't do justice to the series either since the adaptation was butchered to hell and back, not only in a rushing sense but they couldn't be able to even adapt the details because of how many the LN bares, making it practically impossible to adapt unless you decrease some minor or unnecesary info to make it work.

Madhouse, 8bit, whatever the studio is wouldn't negate the fact that S1 (made by Madhouse) had it's problems. The studios shouldn't matter on that front, and I do have faith in the staff despite having mostly the same people aside from the director. But I'm sure things will turn out fine.

Plantz said:
>8bit
Well so much for this having any chance of being good.

To be fair, Madhouse didn't exactly do a good job with the anime adaptation aside from the directional work so Idk. :S

I've been waiting for this for SO long!!

Actually hype. This is easily one of my favorite magic school op mc anime.

This i s great news. This has continued to be a stand out unusual series for the story and the art, and I very much was happy to learn about this possiblty and now to see it is happening. Very good we will have this to look forward to in 2020.

I'll watch this just for the imouto and onii-chan romance :D :D

I haven't seen that anime yet, it looks interesting I'll be sure to check it out^^

Nick-Knight said:
Playcool said:
Dunno if 8 bits did a good job with the movie or not, but I m kinda worried noneless.
The movie is completely original. The vol. 8 is something completely unrelated to it. Vol. 8 is a backstory between Miyuki and Tatsuya and it cemented my love for this series because of how well-done it was. It also reminded me of Full Metal Panic!'s Sousuke and Kaname. It would be very nice if they adapted it as well as a movie.
So vol8 is that backstory? They I have stopped reading just before it then, also are they skipping this volume with the adaptation? I heard great things about it, so kinda meh decision.

Why does really bad anime get sequels and good ones with enough source material don't. strange really.

I'll watch but won't have any exceptions. I watched the first season but was kinda turned off by all the constant technical jargon on magic.

I already heard about this, PTW.