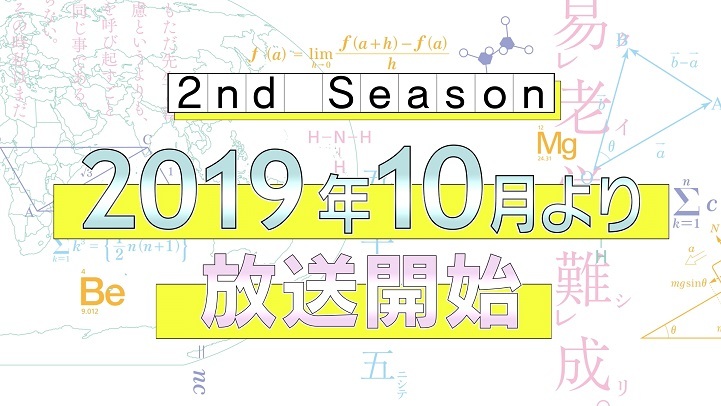 The 13th and final episode of Bokutachi wa Benkyou ga Dekinai (We Never Learn) ended with an announcement on Sunday that the anime series is receiving a second season. The new season is scheduled for an October 2019 broadcast.

Taishi Tsutsui launched the romantic comedy manga, also known by its short name Bokuben, in Weekly Shounen Jump in February 2017, which has 12 volumes in print as of June 4. Shueisha will publish the 14th volume on November 1, whose limited edition will bundle an original video animation. Bokeben has a cumulative 2.7 million copies of its compiled volumes in circulation.

The first anime season produced by Silver and Arvo Animation premiered on April 7. Aniplex of America licensed the anime and simulcasted it on Crunchyroll, Funimation, and Hulu.

VIZ Media licensed the manga in English in April 2017 and publishes new chapters simultaneously with the Japanese release through its Shounen Jump platform digitally. The fourth volume went on sale on June 4. Shueisha's Manga Plus service also began publishing the series in English simultaneously earlier this January.

Looking forward to it! Finished watching the last couple of episodes of Season 1 earlier on today! ^_^

If it's hard to watch, it gets a second season. Of course. . I wasn't able to finish it cause it felt a bit boring with an old perverted plot armor.

I"m so Hyped. I would like see more about Kirisu

Great news, I enjoyed watching this series. I hope the sequel will be as good as season 1. Looking forward to it

Good, good. It's one of the best harems imo.

Not gonna lie, I expected a second season but not in a blink of an eye from us (3/3.5 months is a way shorter delay than years).

I'm happy with that, just hoping it'll be great.

Well,that was a surprise and a good one too

hope to see another great season with better animation

RT. I second this.

The fall season had too many sequels already but here's more!

The epitome of bullshitry: Why otakus are absolute virgins that will never get laid

First is 5toubun S2, and now this. Glad to see decent harem romcoms getting sequels. To those who complain about harem romcoms, read the manga of these 2 they're really good and better than any of the harem romcoms we've seen before.