by ImperfectBlue
Jun 25, 2019 3:01 PM | 1 Comment
A 30-minute theatrical adaptation of Strike Witches: 501 Butai Hasshin Shimasu! will be released in Japan on October 4. Accompanying the announcement are a teaser image (pictured) and promotional video.

This release follows the TV anime adaptation of the same name, which began broadcasting in April and aired its final episode on Wednesday. The film will feature the cast and crew from the show, with the addition of Aya Uchida as Shizuka Hattori, a reprisal of her role from the 2012 Strike Witches Movie. Fumio Itou is returning as the director, and Acca Effe and Giga Production will produce the film with assistance from Anime Beans and Production I.G. 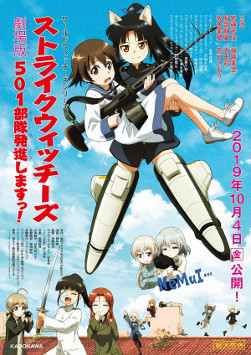 The Strike Witches franchise is an original creation of Humikane Shimada, who has collaborated with other writers and artists in publishing over a dozen manga set in the same universe.