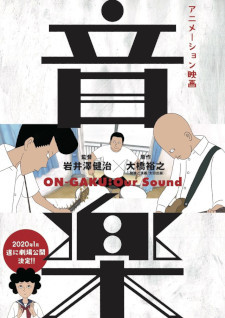 Seven years after the project was announced in 2012, the anime film adaptation of Hiroyuki Oohashi's Ongaku manga is now complete. Ongaku, titled On-Gaku: Our Sound in English, will premiere in Japan in January 2020. The news was announced Sunday on Twitter and the film's official website.

The story follows a trio of hooligans who form a rock band with no prior musical training. The manga was self-published by Oohashi in 2005, and later printed by Ohta Publishing as part of a collection of Oohashi's works in 2009 titled Ongaku to Manga.

A crowdfunding page to complete the film was launched on Makuake in July last year with a goal of 3.5 million yen. When crowdfunding closed in September 2018, the film had exceeded its goal by collecting over 4.1 million yen.

Looks intriguing, but I'm mixed on the animation.

How do you think about this series?

Is this real life??