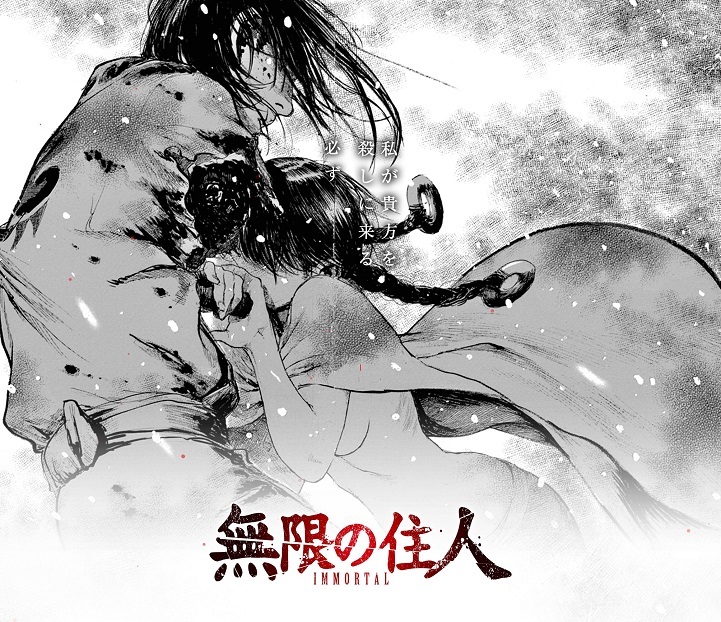 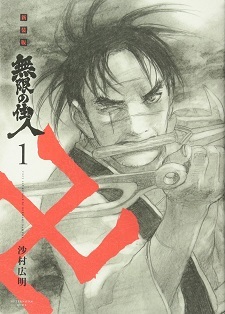 Synopsis
To end his eternal suffering, he must slay one thousand enemies! Manji, a ronin warrior of feudal Japan, has been cursed with immortality. To rid himself of this curse and end his life of misery, he must slay one thousand evil men! His quest begins when a young girl seeks his help in taking revenge on her parents' killers... and his quest won't end until the blood of a thousand has spilled! (Source: Dark Horse Comics)

Samura debuted as a manga author with Mugen no Juunin in Monthly Afternoon magazine in 1993 and ended it after a 19-year serialization in 2012 with 30 volumes. Kodansha later reprinted the manga in 15 omnibus volumes in 2016-2017 and six 5-in-1 electronic omnibuses on September 21 last year. Junichi Oosako published the Mugen no Juunin: Ha-juu Ibun (Blade of the Immortal: Legend of the Sword Demon) novel in 2008, featuring an original story. According to Kodansha, Mugen no Juunin has sold a cumulative 7.5 million copies of its compiled volumes.

Novelist Renji Takigawa (Monument: Aruiwa Jibun Jishin no Kaibutsu) and novice manga artist Ryuu Suenobu will launch an official sequel manga, titled Mugen no Juunin: Bakumatsu no Shou (Blade of the Immortal: Bakumatsu Arc), in the July 2019 issue of the Afternoon magazine on Saturday. Set in the 19th century, the story follows the protagonist Manji, who was living a secluded life in the Tosa region, but heads to the capital after a visit from an imperial loyalist. Takigawa is writing the story in collaboration with Samura, featuring illustrations by Suenobu.

Bee Train—in cooperation with Production I.G—adapted the manga into a 13-episode television anime in Summer 2008, covering the first five volumes. Media Blasters shipped the anime in North America in three DVD volumes between September 2009 and January 2010 and later a complete DVD collection in October 2010.

Dark Horse Comics originally released the manga in English in monthly issues from 1996-2007, but discontinued it after 131 issues. The company published the series in 31 volumes between 1997 and 2015 and began republishing it in 3-in-1 omnibus format beginning January 2017. The eighth volume went on sale on March 26, with the ninth volume scheduled for a July 23 release. The manga has also been published in multiple foreign languages.

Directed by prolific filmmaker Takashi Miike (Dead or Alive, Audition), a live-action film adaptation premiered in Japan in April 2017, grossing over 965 million yen (about US$8.7 million). A stage play based on the manga ran from February 11-16 in 2016 at the Zenrousai Hall Space Zero venue in Tokyo.

Mugen no Juunin received an Excellence Award at the 1st Japan Media Arts Festival Awards in 1997 and won the Eisner Award for the Best U.S. Edition of Foreign Material in 2000.

Yes I love this manga so much that I got Manji's cool symbol tattoo'd on my chest I can't wait, hopefully its better than the shit anime they already made.

Psajdak said:
When will they adapt the entire Berserk manga?

Why, Berserk is gone people, accept it, Miura lost all interest in finishing the manga, Togashi and Inoue are more likely to finish their respective jobs.

Going back to Blade of the immortal, I'm a bit skeptical about this. It is full of adaptations that are not at the manga level and some as bad as for example Blame and Berserk 2016.

Psajdak said:
When will they adapt the entire Berserk manga?

Give it another decade


Inuchiyo said:
Just whoa. Holy shit. A faithful reboot, fans can rejoice. I am loving this trend, now can we get a complete KKOW adaptation/reboot???

No, no we cannot

When will they adapt the entire Berserk manga?

Oh boy this is exciting!

This bitch better get a good studio and staff.

Hopefully this anime turns out to be just as dope as the manga.

And yeah bois, this is the Year of the Samurai.

So is this gonna be the new Dororo??? XDXDXD

Having read 90% of the manga (LOVED IT), seen the live action (and for a LA, it was, imo an impressive attempt at LOT of content). I DID feel the recent anime adaptation, while an admirable attempt, it was a little lacking in character development and length...almost like in the beginning it was a GREAT idea and the budget could handle the task. Then, during production, the budget dried up and the result was a rushed, lacking attempt to bring a FANTASTIC story to the screen.

I'm optimistic that this next attempt will be a better representation of the manga as it deserves it. And IF that would be successful...POSSIBLY? a Lone Wolf & Cub anime adaptation? (the live action is Samurai Cinema at its best!)

I'm really glad, i haven't watched the other adaptation but read some of the manga. Still waiting for an anime adaptation announcement for psyren and fire punch, tho...

Inuchiyo said:
I am loving this trend, now can we get a complete KKOW adaptation/reboot???
That would be a crazy! Well, it did get a recent sequel volume and a really popular live-action series, so maybe it's not completely impossible.

Meh, i don't have high expectation for it.

You need a Hollywood budget to give Hiroaki Samura's art justice and a good amount of episodes to adapt a 30 volumes manga.

I don't know the manga bacause I'm more into Anime than Manga, but the story seems pretty intreseting, I'll definitely watch it...

I imagine there will be a lot of episodes for this as they aim for a full adaptation. This recent trend of older franchises getting revival has my interest.

Loved the first adaptation even if it was too short. So i'm glad to know there will be another one more complete this time.
Manji is such an interesting character !

Sounds interesting, imma watch this when it comes out

This is the best thing I have read all month.