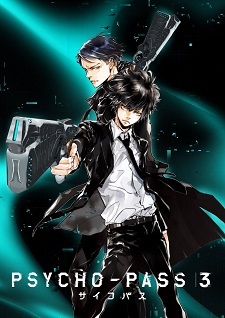 During the premiere stage greeting of the Psycho-Pass SS Case 3: Onshuu no Kanata ni movie, a third season for the franchise was announced titled Psycho-Pass 3. New cast members were also announced, who made guest appearances without prior announcements, along with Naoyoshi Shiotani (director) and Tomokazu Seki (Shinya Kougami). The airing schedule of the sequel was not indicated, but it will air on Fuji TV's noitaminA timeslot.

Psycho-Pass first aired for 22 episodes in Fall 2012, followed by an 11-episode second season in Fall 2014 and a movie in January 2015. It later received a three-part Sinners of the System movie trilogy this year, with its third and final part recently premiering on Friday. A re-edited version of the first season also aired in Summer 2014. The 2015 movie won the Newtype Anime Award for Best Film that year. The series has also spawned several video-game spin-offs, a novel series, and a manga series.

The main characters from the previous series will also appear, as mentioned by Yuki Kaji who appeared on AnimeJapan 2019 stage
https://twitter.com/KAJI_staff/status/1109646425481084928

Apparently, it's not even about Kogami, Akane, even Mika [the second inspector during S2/movies].

They're adopting a new inspector duo. The main dude looks like Kogami.

Tokoya said:
Did not know that we were getting new characters =o I just hope that they're not annoying like Mika was
Mika was the absolute worst lol

So hype! Been waiting for this for too long

i miss kougami and akane duo

Yuki kaji and yuichi nakamura as teammates ?
It reminds me of haikyuu, whereas they're kenma and tetsurou in nekoma high school

> No Tsunemori in the cover
> No Chadgami
> No writen by Urobuchi

Even worse than S2.

I felt the second season was almost like a rehash of everything that worked on the first season and played it too safe. They should have never left Urobuchi out of the picture when they were making it.

If he actually returns to write the third season, I might give this series another chance to watch again.

If Gen Urobuchi comes back as the script writer, then I will be hyped.

S1 was amazing and S2 was fine eventough it wasn't as good as the previous one. Definitely will try watching this and if looking at the poster... it'll be a totally new character? so Akane's role is finished?

If Gen Urobuchi isn't directly in charge of this season like he wasn't with S2, then no thanks.

No Booch, no buys.

Hey, this is great for fans of the series. Congratulations to them!

So hyped. And ofc they bringing big name seiyuu there.

jejehartadi said:
Sakuha said:
jejehartadi said:
I hate to tell you this but Urobuchi is busy playing with his chinese puppets. He won't be back for the sequel.
joke XD but I won't be surprised if it's true lol

lmao may I know what chinese puppets are you referring to?

Thunderbolt Fantasy. Google it. Iirc it's getting a third season.

Can't blame him if he's too busy working on that. Thunderbolt Fantasy is awesome.

I'm very happy to see that this series already gets an announcement for a continuation. I didn't expect this sequel that early, let alone directly after the premiere of the last movie.