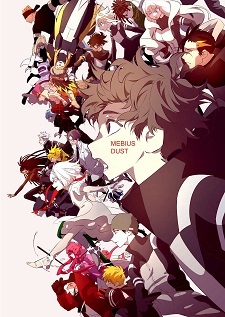 The official website for the previously announced Project Anima has revealed Mebius Dust by Hajime Shinagawa as the winner of the kids/game anime theme on Wednesday. Studio Doga Kobo will be in charge of the anime adaptation to be released in 2020, the format of which is still unknown.

Synopsis
On February 29, 2000, a group of Mebius meteorites fell down to earth. These meteorites brought new material called Mebius Dust, which dissolves in air and can cause miracles. The day the Mebius meteorites fell was dubbed 2.29, and the economic disparity in Japan increased dramatically after that day. A group of people fed up with the wealth inequality fought back with acts of terrorism. The police established a special group to fight against the the terrorists and a school to train members for that group.

Takeshi Hiramatsu from Doga Kobo commented that even though the story is dark and not typical for the kids genre, it centers around family bonds, battles using special powers, and new life after destruction. This submission matches the project goal for animation representing 2020.

At first glance, the boy in front looks like Midoriya from MHA, probably because of his hair o((*^▽^*))o

The synopsis is quite interesting, maybe I'll watch if it's released

Interesting. And made by Doga Kobo as well! Definitely gonna watch this.

The art, for some reason, reminds me of Caligula

Kids huh. I better see that "kids" tag attached to this. Meteors dissolve and things happen. I wonder what kinds of things.

The three ANIMA winners have been announced, and I am going to support all of them. I hope they all do a good job.

I'm not so sure about this but who knows, it might be nice.

This sounds interesting, i'm keeping my eye on this!

Huh, the comment related to Dogakobo's expense is quite... interesting I guess. xD though yeah I can see why since they have BARELY done stuff like this in their end as of recently.

I am surprised that Doga Kobo was more embarrassed that the story is dark and not for children, and not that the main characters are guys, lol.

First time I've seen that image of the series.

@Rei366 Because they are submissions in various forms: either it is in already done form from Estar and Manga Box app., or just in idea forms (planning, script, etc.) from Project ANIMA site itself. In this case, it's a manga submission by the submitter Hajime Shinagawa.

Wait, wasn't this competition supposed to be between pitches for original projects? Why do the news seem to refer to them as adaptations of some book?

Seems fairly interesting, so I’ll keep an eye on this for now!

And thus the three projects for Project Anima have been decided and set in motion, really nice to see such innovative ideas into the mix. I’m particularly looking forward to Studio Satelite’s project but I’ll be sure to check out the other two as well.