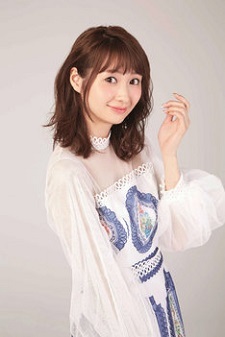 Seiyuu Haruka Tomatsu has announced via her blog that she has married a man not from the industry on Friday. She said she will try to develop a family with a smile and continue working as a seiyuu.

Tomatsu had been interested in being a seiyuu since her third year of junior high school. She was interested in Studio Ghibli movies and wished one day to be able to voice a character in the franchise. A friend of hers, knowing her great feelings of wanting to be a seiyuu, recommended she attend an audition. She passed the 1st Annual Music Ray'n Super Seiyuu Audition which was held from 2005 to 2006. She and other seiyuu from that audition later became Sphere, which will celebrate its 10th anniversary this year. She also placed 15th in Toei Entertainment's Cinderella Audition the following year.

She debuted as a seiyuu in 2007 as a sweet student from Gakuen Utopia Manabi Straight!. She also voiced Naruko Anju from the Ano Hi Mita Hana no Namae wo Bokutachi wa Mada Shiranai. franchise, Iona Hikawa from Happiness Charge Precure!, Nagi from Kannagi, Saki Rukino from the Kakumeiki Valvrave series, Asuna Yuuki from the Sword Art Online series, Keita Amano from the Youkai Watch series, Natsuki Enomoto from HoneyWorks' Kokuhaku Jikkou Iinkai franchise, and more. Her recent role was Zero Two from Darling in the FranXX and Haru Okumura from the Persona 5 the Animation series. As an Aichi Prefecture native, it was also previously announced that she will voice Monaka Yatogami from Yatogame-chan Kansatsu Nikki. Tomatsu's role of Sumireko Sanshokuin from Ore wo Suki nano wa Omae dake ka yo is also upcoming.

She also appeared in the live-action drama Koe Girl! with actress Haruka Fukuhara for the collaboration of the 15th anniversary of the Precure franchise and performed the theme song "It's Show Time!!" together. She won best supporting actress for the 7th Annual Seiyuu Awards in 2013 and the Synergy award for Youkai Watch for the 9th Annual Seiyuu Awards in 2015. She was also one of the best female seiyuu in the 2017 and 2018 Newtype Anime Awards.

Congrats on the marriage. Lucky husbando can now do the chapter 16.5 everyday.

Congrats on the Marriage

Congrats, Haruka for your marriage. Now, it's time to Ayahi and Minako to join Aki and Haruka as member of sphere who're married (so, we have all member who're married)

Congrats to Haruka!! Wish her the best c:!!

Congrats to Haruka. I wish her everlasting happiness in her new marriage and in her new life as well. May her career in both as a singer and as a seiyuu continue to be successful in the years to come.

Wait what about Rito, Giving him to Momo?

ITS TIME FOR TSUGUTSUGU TO MARRY ALSO

The marriage better come with Blu-ray. ❤

Congrats, Tomatsu-san on your marriage!

Oh, Kirito got finally NTR-ed at end, aw the poor...xD


Jk... Well, g'gratulation for her, I wish her the best and an happy life with him in the future!

HanaKana maybe didn't marry yet. But she already live one house with Kensho Ono

Congrats for her marriage, she has been my girl crush since i've heard her voice as Ginko. Her husband is a lucky guy indeed ;3

Congratulations on your marriage Ms Tomatsu. May you be happy together.

Ey, good for her! Omedetou gozaimasu!