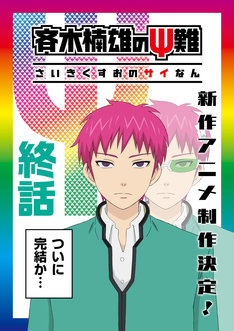 A teaser visual has been revealed and announced that the Saiki Kusuo no Ψ-nan TV series will get a new anime. It also mention that the new anime will conclude the series. There was a hint about the possibility of it in the final episode of the second season, which broadcasted on June 27. More information, including the format of the anime, will be revealed on the Weekly Shounen Jump magazine in October.

Saiki Kusuo no Ψ-nan is based on the manga of the same title by Shuuichi Asou. It started serialization in 2011 irregularly and was compiled into Volume 0. It serialized regularly between May 14 of 2012 to July 26 of this year. The manga has released 26 compiled manga volumes under the Jump Comics imprint, which 26th volume includes one of the 4-koma manga series titled SaiΨ and a sequel titled Saiki Kusuo no Ψ Kidou. Animated by studio J.C Staff and Egg Firm, the first anime season broadcasted in Summer 2016, succeeded by a second season broadcasted this winter. A live-action movie adaptation was screened in Japanese theaters in October of last year. A special event is also planned for this December with main cast members appearing.

Whoa, it ended so soon, but I hope it'll be as great as always. Hyped.

Final Season.This is not good.

Happy for a new season and sad for being the last ...

yasss, always happy to get more saiki kusuo. I think it's one of those series that's better watched than read.

Just happy for more, in any format
.

Yare yare
Awesome news, I expect a special instead of a third season

This is great news, one more season of Shun.

I'm so happy that Saiki is getting an animated conclusion, well deserved.

It won't. At best 12 episodes. There's not that much of content to be adapted be it the chapters that they skipped on past seasons or the new ones that they never adapted.

After this, I'll probably re-experience this through the manga. Kinda hard to let this series go ;_;