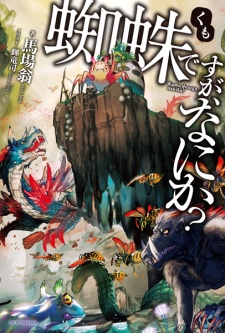 Kadokawa announced at their Anime Expo booth on Friday that Okina Baba's adventure fantasy light novel Kumo desu ga, Nani ka? (So I'm a Spider, So What?) will receive a TV anime adaptation.

The students who died in the explosion will be reincarnated in a different world. The protagonist, who has the lowest reputation in the class, was reincarnated into a spider. Nevertheless, she adapted quickly to the present condition with strong willpower.

This is a story of she who has become a spider trying whatever she can to live. (Source: MU)

Baba originally launched the novel on the Shousetsuka ni Narou website in May 2015. Kadokawa began publishing the novel with illustrations by Tsukasa Kiryuu in December 2015. A manga adaptation drawn by Asahiro Kakashi has also been simultaneously serialized in Young Ace UP web magazine since December 2015. The ninth light novel volume and the fifth manga volume are both scheduled to ship on July 10.

The novel placed third in the 2017 edition and second in the 2018 edition of the Kono Light Novel ga Sugoi rankings.

North American publisher Yen Press licensed both the manga and light novel, and will ship the third volume of each on July 24 and 31, respectively.

It looks interesting. And I like the style definitely going to give it a chance

oh looks like there will be other characters pov ...
https://www.youtube.com/watch?v=Nqu4D8P_oLQ&feature=emb_rel_end

So can someone enlighten me on the adaptation of the anime?! I mean the source material is LN in Mal but will it actually cover POV of other characters and stuff in the LN or it's gonna be like manga? Oh that would suck. Should we just wait to see or...

The spider design reminds me of Suupuushan from Houshin Engi for some reason.

I’m all for them being loyal to the source material, but in this particularity case I would have preferred if they had gone with Asahiro Kakashi’s design of Kumoko (the spider) instead. I think it would have looked and worked better for the adaptation. It is what it is though...

The CGI in the PV looked passable with the exception of that earth dragon. That looked jarring as heck.

Why would they use the ugly novel designs when everyone says the manga designs are better? she looks like a pig instead of a spider.

so much CGI -_-
the face looks sorta weird too
but outside of the blue dragon thingie, it looks good

Now,if only Mushoku tensei also gets an anime adaptation then i would be so glad.

VanishingKira said:
PV:
It will be listed on next week's PV. Also Aoi Yuuki will voice the spider (watashi).