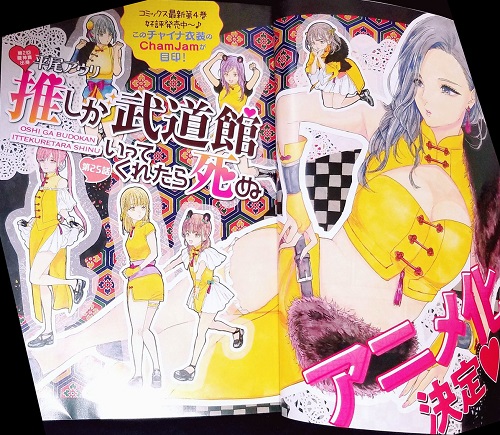 The July issue of Comic Ryu magazine has announced that Oshi ga Budoukan Ittekuretara Shinu will get an anime adaptation. More information will be revealed at a later time.

Synopsis
ChamJam is an indies idol group that is active in the Okayama Prefecture. A fan, who goes under the name of "Eripiyo," supports the least popular member Mana Ichii. Eripiyo is so obsessed that she uses her all of her money to buy merchandise, and wears a red jersey that she wore during her school time. She also gets nose bleeds during live performances because she loves Mana so much. Until Mana gets to perform at the Budoukan venue, Eripiyo's full idol otaku life continues.

Hoppy said:
Idol yuri? this might actually be good unlike the last anime about underground idols and hopefully it' not a short either.

If we believe those reviews that I readed, then this is a pretty good yuri-sh manga with the potential for canonical relations. At least, this is not naked bait about girls with ambiguous orientation.

Idol yuri? this might actually be good unlike the last anime about underground idols and hopefully it' not a short either.

Is that just a bad translation? The synopsis is incomprehensible.

_Ako_ said:
Swagernator said:
So is this idol anime ?

Can never be a yuri bait if the MC is just watching. Presumably NTR, I'd assume.

It's an idol title written by yuri mangaka, and it's a work about a woman who is crazy about another girl. Of course this is at least yrui-bait.

Good question, I assumed they had a different source but I don't see any other named/linked there. Mysterious :)

@nDroae Where did CR get that version of synopsis? Because the synopsis I translated is from its Comic Ryu page, which ended where I did.


The story centers on seven-member chika-idol (underground idols, who don't have a contract with major record companies or promoters) group named "ChamJam" in Okayama Prefecture, and Eri/Eripiyo, a 20-year-old female fan of the group. Eri fall in love with the group's 17-year-old member Maina Ichii when she saw their street live for the first time two years ago. Since then, Eri has dedicated everything she can earn for Maina to support her idol activities. Meanwhile, Maina gradually realizes Rie's sincere love for her and starts wishing to lessen the distance between the two. However, the barrier between an idol and her fan is so high...
It might be useful to have, instead of a "ponytail moe," a shaved head moe

Swagernator said:
So is this idol anime ?

Can never be a yuri bait if the MC is just watching. Presumably NTR, I'd assume.

@Swagernator @elior1 It's mainly female idol otaku Eripiyo supporting the idol she likes from behind and see her grow, judging from the synopsis. It reminds me of another anime series that I forgot the title of, though.

yes that what I want to know

So is this idol anime ?