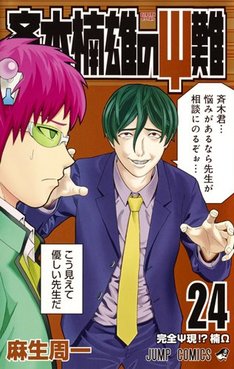 This year's 13th issue of Weekly Shounen Jump magazine that was released on Monday has ended the serialization of the gag manga Saiki Kusuo no Ψ-nan. It has also been announced that a 4-koma series of the manga will begin in the 14th issue of the magazine releasing on March 5.

Shuuichi Asou began Saiki Kusuo no Ψ-nan irregularly in Weekly Shounen Jump in 2011 and was compiled into Volume 0 before it began its serialization in the magazine's 24th 2012 issue. The manga has released 24 compiled manga volumes under the Jump Comics imprint, with the most recent published on January 4 this year.

Animated by studio J.C Staff and Egg Firm, the first anime season aired in Summer 2016, succeeded by a second season which has been currently airing since January 17. A live-action movie adaptation was screened in Japanese theaters in October last year.

The new editor for this manga is Saiki's father. That's why it become this.

Wait, how many chapters are there in total?

Anything happens between Saiki and Teruhashi? Canon-wise, even if it's something little. SPOILER ME PLS ;__;

Anything happens between Saiki and Teruhashi? Canon-wise, even if it's something little. SPOILER ME PLS ;__;

aw, nooooooo!! i just hope that the 4-koma will do well!!

MAN WHAT?! THIS MANGA IS MY LIFE! DAMMINT, I LOVE YOU TERUHASHI

The story was building up to an ending the past dozens of chapters so it wasn't really a forced one. It's in the middle of weekly rankings(like how Saiki wants it?) and has decent sales for a long running series.
It ended on a good note in my opinion so maybe Asou felt it was right to end it there. Maybe he wanted to take it easy for now and release it in 4koma format as I don't think he ran out of material. 4koma seems easier and Saiki fits in that format too. Or maybe he wants to flex his creativity more and do a new series later on. He did get 2 seasons of anime and a live action right now. A new series may take him farther. Let's see if the anime will cover everything given how much it can cover per episode.

this news only give me tears

i mean, they are currently airing anime version, so axed or whatever bad thing from shueisha should be excluded... i wonder if this new trend 4-koma?

Samii said:
Wait, so the manga ended and the 4-koma will be something unrelated from the main story? Or did they just decide to change it suddenly to 4-koma but it is still continuing?
its unknown, but the ending of the final chapters generally seems like a pretty fitting ending of the show overall, they could go either or with it being just side gags or stuff after the series ended

hmm 4-koma is a good way to throw gags.
so did Jump have 4-koma before?

aw i hope the 4koma wont have any effect on the continuation of the anime series franchise.

aw i hope the 4koma wont have any effect on the continuation of the anime series franchise.

The 4-koma is probably going to happen for some weeks to collect stories for the volume. I don't believe that it'll be for too much time.


vincerapog091 said:
What’s the setting of the 4-koma version. Before or after the end?

Wait, so the manga ended and the 4-koma will be something unrelated from the main story? Or did they just decide to change it suddenly to 4-koma but it is still continuing?